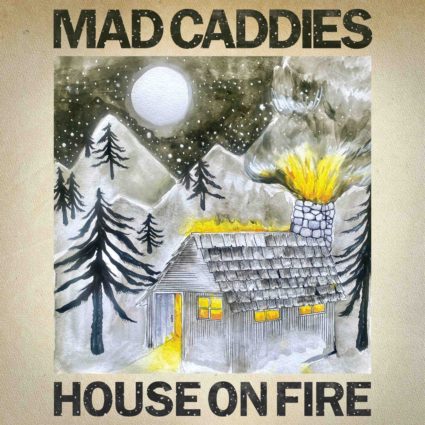 2020 was going to be a big year for the Mad Caddies. The Santa Barbara, California, sextet had reached an impressive milestone: 25 years as a band. Had you asked any member of the Caddies a quarter-century ago if they thought their goofy high school ska band would be celebrating a silver anniversary, they probably would’ve laughed at you between bong hits. But the band managed to make it this far, selling a half-million albums and logging tens of thousands of road miles in the process.

Before the band could really roll out their big anniversary plans, that pesky global pandemic happened — and the Caddies, like every other band, were grounded. But in a strange twist, having this unexpected downtime allowed the group to finally complete a batch of songs they had been tinkering with since 2017: Introducing House On Fire, Mad Caddies’ new five-song EP and their first original music in six years.

“We started writing this collection of songs shortly after releasing Dirty Rice in 2014,” says Caddies bassist Graham Palmer. “It was put on hold a bit as we worked on and toured for Punk Rocksteady, so this downtime recently has allowed us to finish it up.”

House On Fire’s lead single, “Let It Go,” is a chilled-out number that feels sonically similar to much of Punk Rocksteady’s classic punk songs-turned-ska, but the remaining four songs on the EP step away from ska and punk entirely, while still sounding distinctly like the Mad Caddies.

“We’ve always tried to incorporate different genres within our punk/ska roots, and with multiple songwriters in the band, we have a lot of different influences,” Palmer says. “So we never really feel anything is a real departure, but more of ‘How can we make this genre Caddies?’ It’s a fun challenge for us.”

The best example of this is “Waiting For The Real Thing,” a doo wop-inflected R&B number complete with snapping fingers and a big, brassy horn line that feels like it could’ve been played during the Enchantment Under The Sea dance in Back To The Future. The song actually dates back to the Dirty Rice sessions, but it took this long for the band to finally get it right. (“We’ve wanted to do a ’50s-ish type song for a while, so we’re stoked to get it out there,” Palmer says.)

While early tracking for House On Fire actually began in 2017, the majority of the studio work was done this year during quarantine with longtime creative collaborator Thom Flowers (Lagwagon, the Ataris), with drummer Todd Rosenberg handling mixing. The songwriting process was equally collaborative, with frontman Chuck Robertson leading the charge. Adding to the positive vibes in the studio was the Caddies’ new trumpeter Mark Bush, who joined the band in 2018.

“Mark is a great musician and great addition to the band,” Palmer says. “He has a real handle on horn arrangement and theory, and he is always a good person to have in the room.”

One of the best examples of the Caddies’ horn section fitting perfectly is the EP’s closing track, “Wake My Baby.” Described by Palmer as a “straightforward, honest rock song,” the uptempo number about the end of a romantic relationship has bright, punchy horns and a classic 1-4-5 progression during the chorus, feeling like the kind of song Dan Andriano has been secretly sneaking onto Alkaline Trio albums for years. It’s a nice reminder that even after 25 years, the Mad Caddies can still find ways to stretch out their sound.

Oh, and as for that silver anniversary: The band is politely requesting a raincheck, indicating more new music is in the works, as well as potential touring for 2021.