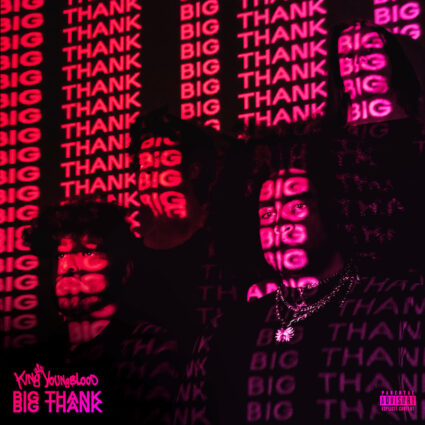 “King Youngblood strip alt rock down to its foundation and build it back up in their own image. This is a band with their heart in the DIY and their eyes on the stadium. Their songs churn with honest emotional intensity and melodies that demand a thousand voices singing along. There’s not a skippable song in the set.” – AfroPunk

Alternative Press calls King Youngblood “Seattle’s Alt Rock Princes” – they sure got that right. What started with University of Washington house shows and became a favorite at Seattle’s underage venue Vera Project has built undeniable momentum; major 2022 festivals are already on the books, from Treefort to Capitol Hill Block Party to Brodie Nation Festival to Punk Black Fest.

BIG THANK is the writing/producing collaboration of Cameron Lavi-Jones, front man and founder of King Youngblood and Producer/Artist Eric Lilavois (Ayron Jones, Saint Motel, Island Apollo), one of the owners of the historic London Bridge Studios in Shoreline, WA (Pearl Jam, Nirvana, Brandi Carlile, Soundgarden), a member of the band The Copper Trees, and the President of the Pacific Northwest Chapter of The Recording Academy. “Cameron is a young man with an old soul, it’s exhilarating to work with him, and the positive, focused light he brings to our sessions” says Lilavois.” Adds Lilavois,” Seeing Cameron balance the strong vision he had for these songs and this record, various collaborations, and continue to adapt throughout its course, was really a joy to support and witness. In checking in with him throughout the process, there were many aspects of this he took on completely all on his own, and things were recorded at different times, in different ways, and that’s always a feat, but he rose to the occasion time and time again.”

Says Lavi-Jones, “BIG THANK is the most authentic representation of who King Youngblood is right now. If I’m being honest, this is really the first time we’ve released a body of work that I have felt this level of pride about. I know it comes from the focus on intentionality that we’ve been able to apply to this album. There is so much catharsis, so much vulnerability, and yet we are still finding a way to either poke fun at the negatives or downright reclaim our power from them.”

The songs on BIG THANK speak loudly to the needs of young BIPOC people and youth in general to feel heard in our turbulent times with several songs including Thread, Too Late Too Soon, Cried In My Cadillac and Home is Only A House showing promise as particularly radio friendly.

Indeed, despite the setbacks due to the pandemic, 2021 was a big year for King Youngblood. Following the high six figure streaming success of singles “Yakubian Antics” and “Too Late Too Soon”, the band was asked to perform at the pre-game Seattle Seahawks show at Lumen Field on October 7th. The band’s unstoppable live shows have earned them opening slots for Pearl Jam, Naked Giants, and Ayron Jones.