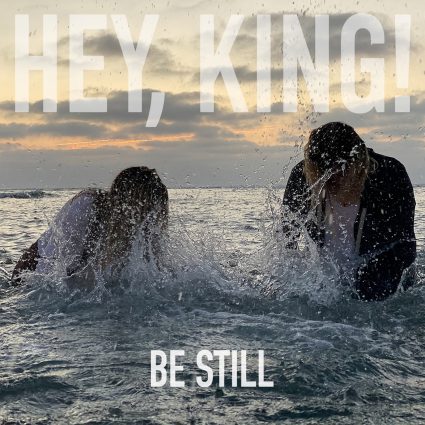 When you first hear Canadian born, California based indie rock band Hey, King! it immediately becomes clear that each musical moment is rendered with precision, care, and a whole lot of heart. These are powerful and humanity affirming songs from songwriter, vocalist, and multi-instrumentalist Natalie London and her partner, vocalist and percussionist Taylor Plecity. A high-spirited eight piece orchestral band when playing live, Hey, King! has the exuberance of Arcade Fire, the freewheeling simplicity of Tom Petty and the wit-filled resonance of Fiona Apple.

If Hey, King! makes resilient songs, it’s because London has overcome a life’s worth of near-death illness. Though she had started her career while at Columbia University, she contracted Lyme disease and co-infections Babesia and Bartonella on an early tour, forcing her to be bedridden for over four years.

“During that time, I couldn’t walk, talk, read or write, I lost a great deal of my memory,” London explained. “I felt like I had a complete chance at a brand new life and everything from my writing to what I listen to reflects that.” She adds, “Starting my life over, I felt like a kid again. There was so much unharnessed passion, longing and a need for both adventure and home.”

As London navigated her recovery and began to explore her new musical identity and lease on life, she met musician/actor Plecity. Their relationship evolved to the couple making music together. “While it makes for a really complex dynamic, you get to share every incredible experience you’ve been waiting your whole life for with the person that you love the most,” says London.

The band’s upcoming debut album was produced by Ben Harper, who has been Hey, King!’s biggest champion since the moment he first discovered them through a mutual friend. Harper brought them into Sheldon Gomberg’s Silver Lake studio. Harper also brought them on the road with him, where they were the opening act on two Ben Harper and the Innocent Criminals international tours.

#5 is a cover of The Animals’ “We Gotta Get Out Of This Place” and it features Eric Burdon from The Animals and War.