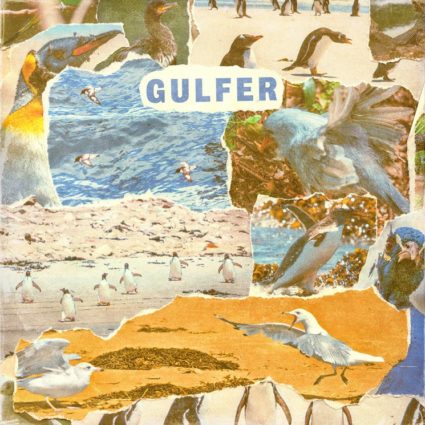 “The Montreal band grows up on their third album, crafting well-made, emo-adjacent songs all while trying to summon enough energy to stare down looming adulthood.” – Pitchfork (7.4)

“They’re a band that live and breathe their scene, their shows and their instruments, consistently finding new ways to innovate their sound and build upon what has already been a fruitful few years” – GoldFlakePaint

“Gulfer have channeled their energetic approach towards rejuvenating melodies and lingering, raw feelings and their latest is a truly satisfying embodiment of their most collaborative songwriting effort to date.” – Exclaim!

“For much of the 2010s, the quartet […] has delivered [Montreal’s] most serpentine of rock anthems, full of interweaving goodness and humble intensity.” – Cult MTL

“Talented and bold, they are the face of elevated emo.” – New Noise

Having spent the past couple years wavering between self-doubt and having it figured out, Montreal’s Gulfer have returned to the fore with their third full-length record. Composed of thirteen tracks of intricate, dexterous, and incredibly fun, punk-inspired emo tunes, Gulfer sees the Montreal quartet settled into their own with a career-defining record.

Set to be released via Topshelf Records, as well as with the band’s first ever Canadian label in Royal Mountain Records, Gulfer is expansive in a way that sets it apart from the debut What Gives and the Pitchfork-approved Dog Bless. Delving into their collective influences by drawing from elements of grunge, shoegaze, and contemporaries Oso Oso and Prince Daddy and the Hyena, the band never turn their back on their earliest inspirations, with stylistic threads tracing easily back to Glocca Morra, Algernon Cadwallader, and TTNG.

Explosive, agile emo serves as the backdrop to guitarist and vocalists Vincent Ford and Joe Therriault’s honest and vulnerable lyricism, with the two sharing the writing process on a record that tackles human nature; exploring self-doubt, resentment, complex relationships, climate change, and the waning of youth. The band never lose the sense of playfulness and fun that is omnipresent in their live show, an undeniable, electric energy that stems from being a group of close friends before all else.

Made to represent where they are, rather than worry about how they will be perceived, Gulfer is a statement of confidence and ambition. Free of former notions that they needed to write in a certain way to sound like themselves, the band instead went with their gut and wrote what came naturally. The result is their most definitive work to date, a record that focuses less on ultra-technical musicianship and more on structure, space, and feel. With renewed energy in their freshened sound palette and their most collaborative songwriting yet, Gulfer have created an album that sounds fresh and exciting, which is no small feat for a band with two albums, a handful of EPs, and eight long years under their belt. The deft and interweaving interplay of Ford and Therriault’s guitars is grounded by bassist David Mitchell and drummer Julien Daoust, whose dexterities and musicianship animate the album with explosive, emotional kineticism.

Having toured all over the world through Japan, Poland, France, Slovakia, Italy, Germany, Czech Republic, Serbia and many more, and sharing the stage with the likes of PUP, Joyce Manor, Foxing, Into It. Over It., Title Fight, performing at festivals such as SXSW, ArcTanGent, and Pop Montreal, the band is well-positioned to take their rightful spot centre stage, galvanized by their newest and best record, Gulfer.