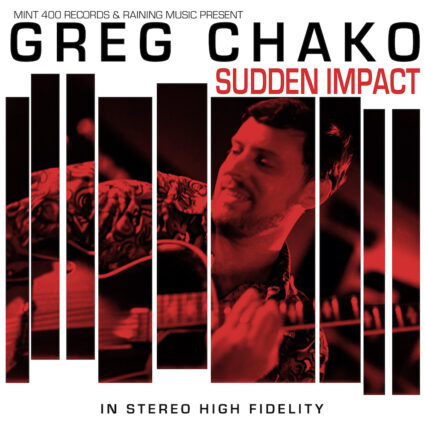 “ …old standbys get spiced up with latin rhythms, experiencing sudden ubiquity and fresh sound… The originals have a contemporary sound, colored with understated funk and backbeats, and girded with interesting structures… He uses his thumb to execute winningly lyrical lines made up of pillow-like notes…” – Cadence Magazine, USA

“ …warm guitar, gently flowing lines and occasional bursts of lush chords, Greg favors the use of his thumb to produce the rich sound he achieves… The music swings compulsively at times… The leader’s exotic sound and constantly inventive lines, the mainstream appeal of familiar material being given a refreshing twist, and a driving rhythm section” – Jazz Journal, England

“Everything about this CD from the choice of material to the sensitive support, oozes class… His tone is warm, yet incisive… Unusually bright post bebop style, and all octaves are handled authoritatively… a wonderful showcase for Chako.” – Just Jazz Guitar, USA

Sudden Impact is a strong, varied program of jazz from a guitarist who, in the tradition of Wes Montgomery, plays only with his thumb. It includes 5 latin-jazz tracks and 4 original compositions in a trio, quartet and quintet format. With over 65 minutes of music, it showcases of Chako’s lyrical, persuasive lines, and a fat, rich guitar sound, and also serves as a premier intro to his original and ever evolving writing and arranging style.

“In 1994 shortly after recording my 1st CD, Everything I Love, I moved from Hong Kong to the tropical island Republic of Singapore, where I began working as a guitarist/bandleader. I have been leading a steady trio at the Bar and Billiard Room of the famous Raffles Hotel six nights a week since October 1995. For a couple of weeks we enjoyed the addition of two guest percussionists who, passing through town, had come to “sit in” with band. We had so much fun jamming on jazz standards with the added latin beat that I suggested we get into the studio one day for an informal recording session. All the latin influenced selections on this CD are a result of that session. Later, with the help of three guest players, I decided to record four of my original compositions. Those sessions produced the rest of the material for this CD. Music certainly is a universal language. The musicians who took part in this recording come from very diverse cultural backgrounds, and like Singapore itself, this CD contains a healthy mix of styles. I hope you enjoy listening to the music as much as we enjoyed making it.” – Greg Chako, August 1996