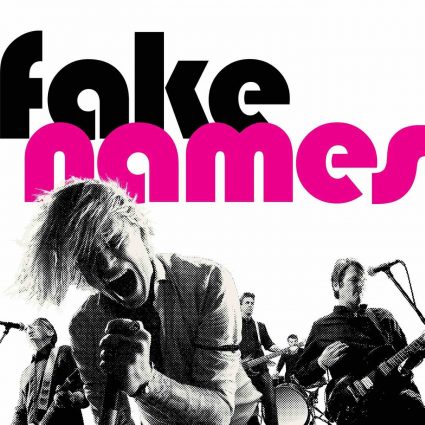 In early 2016, D.C. punk legends Brian Baker (Minor Threat, Dag Nasty, Bad Religion) and Michael Hampton (S.O.A., Embrace, One Last Wish) met up at Hampton’s Brooklyn home to play music together, with no intentions beyond possibly writing a song or two. Friends since first grade, the two guitarists ended up writing a handful of songs that day, then closed out the session with a spur-of-the-moment decision to start a band. When it came to finding a bassist, Baker and Hampton looked to Johnny Temple of Girls Against Boys and Soulside (another fellow student at their elementary school), who equally shared their passion for what Temple refers to as “loud, angry, visceral music.” By the end of the year, the band had enlisted Refused frontman Dennis Lyxzén as their singer, thus cementing the lineup to punk-rock supergroup Fake Names.

On their self-titled debut, Fake Names bring their collective history to a 28-minute burst of unbridled energy. Co-produced by Hampton and Geoff Sanoff and recorded at Renegade Studios (a New York City facility owned by Little Steven Van Zandt), the album augments their bare-bones breed of punk with a heavy dose of power-pop, cleanly manifested in the band’s bittersweet melodies and abundant backup harmonies.

At the heart of Fake Names is the singular kinship between Baker and Hampton, ineffably informed by sharing stages in their respective bands during the genesis of American hardcore music. “This feels like years of buildup to two phenomenal guitarists finally playing in a real band together,” says Temple. “It’s two lead guitar players who really know how to work together, with such an incredibly fluid meshing of their individual styles, and there’s never a moment where they’re competing over who’s playing the catchiest riff. I’ve never seen a hint of anything like that before.”

While Temple emerged from the same culture-shaping scene as Baker and Hampton, Lyxzén hails from an entirely different musical universe, having co-founded Refused in the Swedish city of Umeå. But when Refused, Girls Against Boys, and Bad Religion shared the bill at Riot Fest Chicago in 2016, both Baker and Temple were struck with the sudden inspiration to recruit Lyxzén as their singer—an offer he happily accepted. “I’m a huge record collector, and I’ve been hoarding all of their records for years,” notes Lyxzén, who names Minor Threat and Embrace among his favorite bands.

Once he’d returned to Sweden, Lyxzén began writing and recording vocals for the demos that Hampton had sent him, adding an element of lyrical invective that instantly gelled with his bandmates’ sensibilities. “We all have long histories of playing in bands where the singer is critiquing mainstream society and corporate society, and Dennis definitely didn’t shy away from that kind of critique,” Temple points out. And when Lyxzén headed back to the U.S. for a series of practice sessions, the band felt an automatic musical chemistry. “Dennis fit right in with us,” says Baker. “He’s a great singer and his ears were tuned to the kind of music all our bands were making back in the ’80s, so he knew exactly what to do. All of it made sense of immediately.”

Soon after dubbing themselves Fake Names—a moniker that’s part Raising Arizona reference, part recognition of the “ubiquitous and demonic use of the term ‘fake news,’” according to Baker—the band headed to Renegade Studios with the goal of creating a demo to present to record labels. But after playing those recordings for Baker’s Bad Religion bandmate Brett Gurewitz, the Epitaph founder made an unexpected proposal. “Brett said to us, ‘This isn’t a demo, this is the album,’” Baker recalls. “He was pretty adamant about putting it out exactly as it was, so that’s what we wound up doing.”