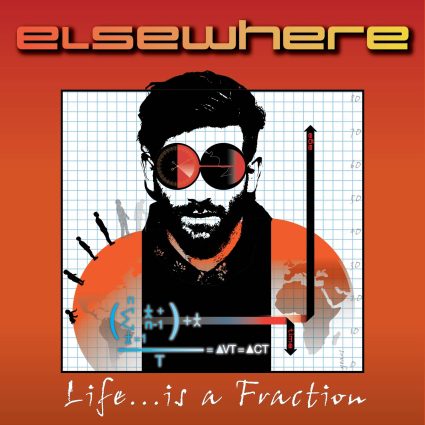 Prog-leaning alt/power-pop/new wave Boston-based trio Elsewhere–led by frontman and guitarist Michael Aroian and drummer Adam Soucy–released their musically adventurous and evocative concept album Life…Is A Fraction on November 4. This follows the release of the album’s two singles: “Call You Out” and “The Pledge.”

For their third album, Elsewhere worked with producer and long-time collaborator David Minehan (Replacements, Aerosmith). Life…Is A Fraction weaves together a fascinating, semi-autobiographical narrative about how our perception of time shifts as we grow older. Days, months, and years seem to speed up…until a frightening, life-changing diagnosis–and being forced to face mortality–changes everything once again. The record is based on the cancer diagnosis Aroian received several years ago which served as a defining point in his life.

“I became cognizant of relative time in my 30s,” Aroian says. “The idea behind Life…Is A Fraction is that at any age, we have only lived a fraction of our lifespan. When you’re five, you’ve maybe lived 1/16th of say, 80 years. When we’re children, life events seem to take much longer because we’ve only lived a very small part of an average life. In this fraction, the numerator is the number of days you have lived, and the denominator the total number you will ultimately live. In the story we tell on the album, as in my own life, the protagonist’s denominator is potentially cut short by getting sick. It sped everything up, and he, like I, was suddenly able to see time move. The more days that go by, the faster time seems to go as we rapidly approach our denominator.”

As the protagonist wanders through life before being brutally confronted with his own mortality, he explores various options–face it, embrace it, defy it. Through it all, Life…Is A Fraction teeters precariously on the edge of sanity. “When I was diagnosed with cancer, I experienced this first-hand,” says Aroian. “My denominator was reduced. I now literally live it every day. Time is indeed fleeting and the sooner we realize this, the sooner we can take control and live each day to the fullest. The tragedy is not that this is happening to us, but that we might not learn from it or do anything proactive or meaningful about it.”

Life…Is A Fraction shows the band reaching a creative zenith (all in a hard-hitting 34 minutes); it’s an original rock epic that shakes the foundations not only of what everyone’s come to expect of the New England trio, but also of the lives of everyone who listens. Musically, it was influenced by front man Aroian’s lifelong passion for Rush and particularly their 1978 classic album Hemispheres, as well as the early Genesis catalogue. After the main 10-song cycle, the album ends with Elsewhere’s most recent singles, “Call You Out” and the aforementioned “The Pledge.”

The band previously released two albums and EPs and are best known for their single “Don’t You Believe Me Baby,” a dynamic cover of a previously unrecorded early 80’s Police song. That atypical release helped the band generate over half a million streams on Spotify and score a full-page story in the Boston Herald. It was followed by the “banthem” (ballad/anthem) “The Pledge,” which broke important ground by tackling the often-taboo subject of Alzheimer’s Disease; the song was mixed by Grammy-nominated producer Mark Needham (The Killers, Imagine Dragons, Pink, Elton John).