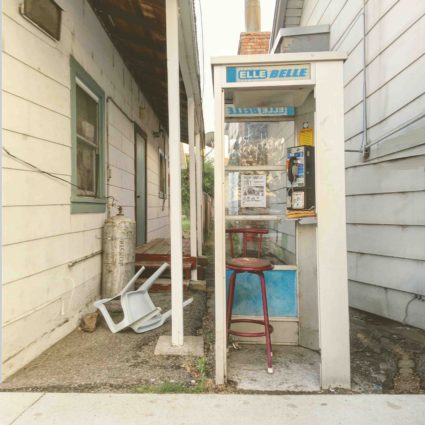 “Yeah, I think they’ll drop the bomb. I guess my one regret is that I’m over it.”

Post Everything is about reckonings. The emotional fatigue of the last few years had filled my heart with a deep misanthropic nihilism. Through personal, political, and cultural grieving, these songs rake through the ashes of an era and ask – where do we go from here? Post Everything is a journey through this nihilistic wasteland, and that if we dig deep enough, we can still find droplets of hope.

Elle Belle is the alter-ego of award winning composer/songwriter Christopher Pappas. His debut album WAKO GUMBO, a sprawling 20 song double LP, was released in 2016 to critical acclaim followed by his sophomore album No Signal that received 4 stars from All Music who called him “a swaggering experimental pop maverick with a penchant for spacy electro-organic psychedelia and an overflowing bag of big ideas.”

“Thinly cloaked as his views may be, Pappas offers a fresh take on the nation’s social climate while also expanding his sonic territory.” – Timothy Monger for All Music

Pappas grew up in rural New Hampshire where he started the band The Everyday Visuals. After relocating to Boston the band began to amass a cult-like following of fellow musicians and fans who were attracted to Pappas’ penchant for vocal harmonies and catchy left-of-center songwriting.  He moved to Los Angeles in 2010 where he met Pierre de Reeder, bassist for the venerable L.A. band Rilo Kiley. Pappas released a solo record under the name Miracle Parade on Pierre’s newly founded label Little Record Company. While recording the second record he suffered a creative breakdown, leading him to abandon the record and create Elle Belle.

Mixed with a variety of genres; psych-rock, prog, electronic, Elle Belle continues Pappas’ knack for rich, intricate songwriting. He has written music for NASA, composing the soundtracks for the Juno and Rosetta mission official docu-series. He also composed an award winning musical (“Pope! An Epic Musical”) with the Wall Street Journal praising it, proclaiming “[Pope!] is proof that the musical [genre] isn’t dead!” He is also a prolific writer, churning out 2 T.V. pilots and a new full length horror feature that are currently in development. His dense and eclectic catalogue is why many consider Pappas as one of America’s most prolific and captivating under-the-radar artists.