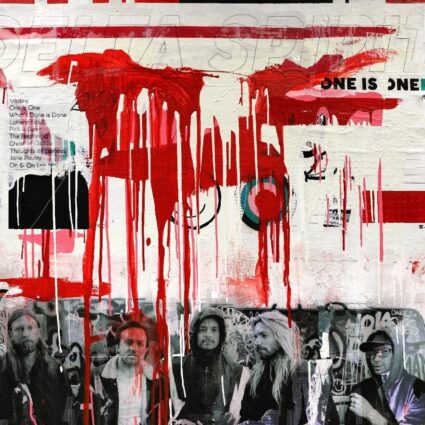 Delta Spirit - One Is One

We collect observations of the world around us much like souvenirs. We treasure and hang on to them as memories of where we’ve been. Keenly tuning into life in all of its glory, Delta Spirit alchemize these honest and heartfelt observations into songs. The acclaimed California band—Matthew Logan Vasquez [vocals], Kelly Winrich [multi-instrumentalist, vocals], Will McLaren [guitar], Jon Jameson [bass], and Brandon Young [drums]—ponder big questions through poignant plainspoken lyrics uplifted by moments of sweeping rock ‘n’ roll and flourishes of immersive synth-craft. The group’s sixth full-length album, One Is One [New West Records], documents the most important moments they’ve lived and key lessons they’ve gathered along the way.

“One Is One essentially says, ‘What is life all about? Here are some observations’,” Matt muses. “The songs are epic in this respect. Over everything I’ve learned, I know to be peaceful is a choice. It’s not always easy, but it is possible. We are capable of growth, compassion, and empathy; we just have to reach out and activate our better angels. I do that by writing songs. I think that’s what the album is about.”

Delta Spirit have naturally inched towards making such a statement. Since forming in 2005, they’ve captivated audiences with favorites such as Ode To Sunshine [2008], History From Below [2010], Delta Spirit [2012], and Into The Wide [2014]. Not to mention, they’ve graced the stages of marquee festivals such as Coachella and Lollapalooza and television shows, including Jimmy Kimmel LIVE!, Jools Holland, and Austin City Limits. Meanwhile, the group reached critical mass via syncs on shows like Friday Night Lights. Following a six-year break, the collective returned with What Is There in 2020. Beyond tallying nearly 20 million streams, it arrived to widespread critical acclaim from Billboard, Consequence of Sound, Flood, MXDWN, and Spin. American Songwriter attested, “Vazquez and his bandmates may have indeed made their masterpiece,” while Classic Rock Magazine in the UK hailed it as “beautiful and haunting.” Unfortunately, they couldn’t tour in support of What Is There in the midst of the Global Pandemic.

“It took over a year before we could be back on the road again,” Vasquez sighs. “In that headspace, we started another album. What else were we going to do? We needed to keep going.” Churning out ideas separately throughout the summer of 2020, Brandon flew to Austin where he and Matthew recorded early ideas for what would become One Is One. (continue reading full bio on DISCO)