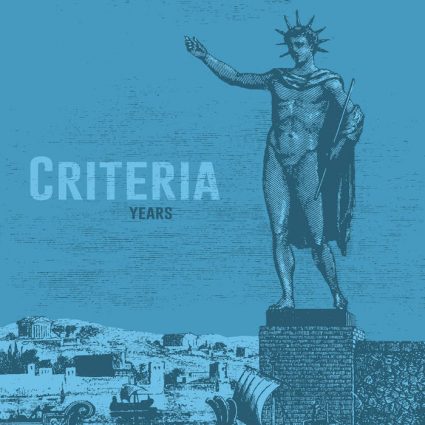 Criteria just announced their first new album in nearly a decade and a half, aptly titled Years. The new album will be released on January 17, 2020 via 15 Passenger, a label owned and operated by singer, Stephen Pedersen’s old bandmates in Cursive. Last week they premiered explosive anthemic lead single “Agitate Resuscitate” as well as a comical short film featuring a dual over the album’s release between singer Stephen Pedersen and Tim Kasher of Cursive via Brooklyn Vegan. The song’s syncopated post-hardcore groove and shout along lyrics set the perfect tone for the rest of the record melding their hallmark anthemic sound with new hints of prog, post-punk and just a touch of metal.

Criteria’s Years has been in the making for quite some time. No joke, like a really long time. But the album’s delay seems to be a badge of pride for the group, one that underscores the relentlessness of their collective vision to see it happen some fifteen years after the release of their sophomore LP When We Break (Saddle Creek). The drums were tracked at Omaha’s ARC studios in 2014 and eventually the guitars and vocals were finished in Pedersen’s basement studio. Criteria’s own A.J. Mogis wore the hats of both bass player and producer/recording/mixing engineer. His production credits include Monsters of Folk, Fake Problems, Small Brown Bike, The Get Up Kids, Planes Mistaken for Stars, and Cursive. On Years, Mogis and Pedersen — along with guitarist Aaron Druery and drummer Mike Sweeney — have once again set the bar very high for self-produced rock albums. It has a sound that conjures the likes of both Quicksand and Built to Spill, with it’s high energy riffs/grooves under the catchy, melody-forward vocal lines. For the uninitiated, the band was formed by former Cursive guitarist Stephen Pedersen in 2003 after he moved back to his hometown of Omaha following his graduation from Duke University and the subsequent dissolution of his beloved North Carolina-based “college rock” act, The White Octave. After releasing their debut En Garde that same year on Initial Records, Criteria signed to Saddle Creek Records and put out When We Break in 2005. In support of the album, the act toured with groups like Jimmy Eat World, Minus The Bear, Cursive and Poison the Well, and converted countless fans to their anthemic brand of post-hardcore.

Criteria has announced a string of winter dates supporting Cursive and Cloud Nothings which will cover much of the west coast beginning January 16th in Denver, CO and includes a January 26th show at Los Angeles’ Teragram Ballroom.   Contact us with any requests!