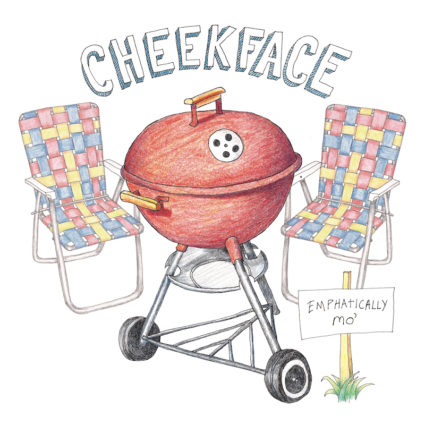 “Cheekface tap into real anxieties and the shared understanding among their peers that the present is spectacularly stupid, which only warms the heart.” – PASTE MAGAZINE

“Whimsical and entertaining … the band is talented at instilling life into the mundane.” – STEREOGUM

“By constantly invoking markers of escapism and consciousness, Emphatically No. wrings as much fun as possible out of decidedly not-fun times.” – EXCLAIM!

“…Emphatically No. is unabashed absurdist joy, brought to life by the band’s upbeat instrumentals and tight rhythm section. Though everything is certainly not normal, no other band translates our ongoing existential crises into danceable fun quite the way Cheekface does.” – UNDER THE RADAR

“Emphatically No. is such a fun listen front to back, nothing but punchy guitars, spastic rhythms, and wonderfully erratic song structures all housing a cleverness that makes Cheekface a wholly unique experience.” – POST-TRASH

“Cheekface does an impeccable job of making the listener happy and acting as a supportive voice, someone to look to and take cues from.” – THE ALTERNATIVE

“We started recording the Emphatically No. album without enough songs, and we ended up with too many. So a few tunes fell under the axe that swung to keep a good flow in the track sequence and make the record short enough for a 12-inch LP. Not every song is your best song, and b-sides definitely aren’t, with the possible exception of Booker T’s ‘Green Onions.’ But with these four tracks, me and Mandy were definitely exploring the same themes of loneliness, futility, insomnia and Diet Coke as the rest of the album, so I think they make a pretty good companion,” said Cheekface singer and guitarist Greg Katz.

Cheekface is an indie rock trio from Los Angeles consisting of guitarist/singing person Greg Katz, bassist/other singing person Amanda Tannen and drummer Mark “Echo” Edwards. It’s a band obviously influenced by the great American talk-singers like Lou Reed, Jonathan Richman and Stephen Malkmus, British post-punk bands like Wire and The Fall, and proto-indie bands like The dB’s and Minutemen. But Cheekface chart their own course with their self-effacing, openhearted lyrics that set the mundanity of daily life against the backdrop of our chaotic world, as in the memorable “Best Life,” when Katz blurts out, “Due to personal reasons, I said nothing in therapy / we just laughed and laughed and laughed and laughed and laughed!”

The story starts in 2018, when the band’s second single “Dry Heat/Nice Town,” a playful pub rock tune about leftist protest culture, created an underground hubbub. It anchored the band’s debut album Therapy Island, released by the New Professor label in March 2019. In the wake of that album, Cheekface’s followup singles and singalong, everyone-in-the-audience-climbs-on-the-stage shows created a word-of-mouth cult around the band’s sideways lyrics, catchy choruses, and windows-down grooves.

Over the course of 2019 and 2020 Cheekface recorded their sophomore LP Emphatically No., released in January 2021 on New Professor. Paste Magazine called the record “essential listening” and it bowed as Bandcamp’s top-selling alternative album. They chased the album with singles “We Need a Bigger Dumpster” and “Next to Me (Yo Guy Version)” later in the year (both also on DISCO if you missed them).