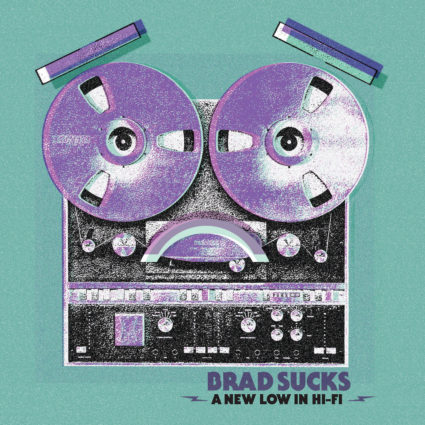 “Brad once again skillfully rides the line between bitter melancholy and cautious hope, offering up an excellent piece of introverted DIY electronica in the process.” – Under The Radar

“Brad Sucks create a flipbook of music where each song is bizarrely unique then the prior, experimenting with various genres.” – Glide Magazine

“With its Grandaddy vibes, the mumblecore indie-pop single was an excuse to mend bridges with the indietronica icons” – FLOOD

Brad Sucks is the musical project of Canadian Brad Turcotte, who modestly began releasing his home-recorded songs online in 2000.

His fun, pop-rock energy paired with blunt, downer lyrics often explore subjects like anxiety and depression with transparency and humor, creating the ironic charm he’s come to be known for.

Brad’s relatable subject matter celebrates what it means to be human and provides the soundtrack. But he’s loved just as well for how he’s created his music since day one – at home, by himself, driven by the prospect of reaching people all over the world.

Propelled by the 2003 release of his first full-length album, I Don’t Know What I’m Doing, his now massively popular song Making Me Nervous (a catchy dance track about paranoia) has garnered millions of streams and lifelong Brad Sucks fans across the globe.

At the time, Brad was especially appreciated for sharing his album’s source files openly online, allowing listeners to remix the songs, and even offering access through a pay-what-you-can method. Today, Brad’s projects are still largely crowdfunded thanks to platforms like Patreon and Indiegogo, and an ocean of music-hungry fans.

A follow-up album in 2008, Out of It, further refined Brad’s songwriting skills and self-deprecating humor with confessional rock anthem Dropping out of School. The track also saw countless features on television, radio, and the emerging YouTube, launching the Brad Sucks name to even greater heights.

During the creation of his third album in 2012, Guess Who’s a Mess, Brad struggled with the increasing expectations and pressures around his success, which ultimately resulted in a self-induced autoimmune disorder that he struggled with for a year, which he now finds hilarious. Despite this, the album did not disappoint, delivering fan favourites like Model Home and Feel Free! Plastic Surgery!

Over the long nine years since, despite performing live shows and writing many new songs, Brad has officially released only one: Lonely, featured in the hit animated series, Bee and PuppyCat.

This year will mark the return of Brad Sucks with his first full-length album in nearly a decade. Ten fresh tracks will reveal what life’s been like for Brad since his departure, showcasing some creative collaboration with In It to Win It feat. Jason Lytle of the legendary band Grandaddy, moody melodies in A Little Distance, and psychedelic vibes with Fun Guy.