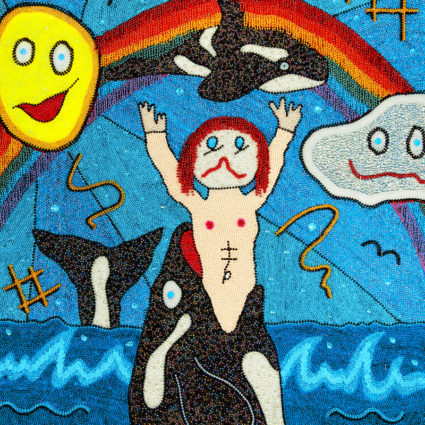 Indie-rock enigma Baby FuzZ is back again with his sophomore album Welcome To The Future (Season 1). It’s the first installment of a forthcoming double album and is the musical equivalent of an animated nuclear meltdown at Sea World. With giddy album art created by LA based artist Benjamin Cabral depicting a pod of orcas eating a white male while a smiling cloud and sun look on, the album could be described as colorfully apocalyptic.

If you are familiar with Baby FuzZ’s debut album Plastic Paradise, you may be in for a jolt. From the very top it’s clear that the loudness and aggression has been cranked up from his debut. With hints of glam rock, emo, pop punk, and folk, FuzZ continues to discard genres like dirty socks. The lyrics are self deprecating and satirical, while the songs thematically deal with ideas of environmentalism as well as future and past. It seems appropriate, since Baby FuzZ, the alter ego of seasoned songwriter Sterling Fox, has worked with everyone from Madonna to Avicii. And while the songwriting is clearly top notch, the project is unapologetically punk in approach and bedroom in aesthetic.

Although only 7 tracks, the album is loaded with goodies, ranging from the epic arena rock singalong “Before Our Time” featuring LP to the nihilist comedic punk tune “We’re All Gonna Die!!!” to an environmentalist rock anthem and title track “Welcome To The Future”. The newest standout song on the album, though, is “I’m Trying My Freakin Best” which is a song FuzZ wrote whilst on a 100 date self booked tour in 2019. It is a song about a musician attempting to reconcile failure with effort.

Incidentally, the Baby FuzZ live show, which often morphs into lowbrow caricature of a cheesy, failing musician or bizarre performance art, has certainly informed this album. The lyrics are hyper self aware and there is quite a bit of imagery and metaphor throughout, mostly relating to the dystopia of this year. And although at times the album hints that the world just might be doomed, Welcome To The Future ultimately shines as Baby FuzZ’s cathartic acceptance of personal responsibility for its demise and ultimately a call to action to do something about it.