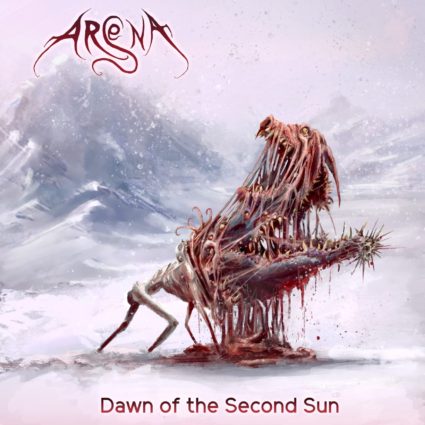 Based out of Baltimore, MD, Arsena is a 4 headed chimera of genre-defying influences creating a new, unique spin on its core sound of old school thrash metal. The group expands upon its musical similarity to Megadeth, Revocation, Havok, and Primus with a haunting sense of atmosphere and melody long since lost by the genre.

After 3 years of playing locally and on tour in the north eastern United States, Arsena released their sophomore EP “Dawn of the Second Sun” on physical and digital formats. This 4 song, genre-bending epic of dynamic soundscape gripped listeners worldwide with its dissonant riffage, blues-inspired solos, interconnected lyrical content, and catchy, melodic vocals. It has since been streamed thousands of times on multiple formats including Spotify, YouTube, and Bandcamp. After the exponential increase in fan base from the release, Arsena has returned to their home studio to begin writing and recording their upcoming full length album for the end of 2021. In the meantime, they continue to promote their work with all forms of media including photography and music videos.

Before the impact of the COVID-19 pandemic, Arsena opened for large groups such as Mushroomhead, Tengger Cavalry, September Mourning, and Silvertung, and played multiple shows on the 2019 national tour of heavy metal outfit Vicious Rumors. They have rocked the stages of renowned venues such as Virginia’s Blue Fox Billiards, Baltimore’s Fish Head Cantina and Baltimore Soundstage, and Philadelphia’s The Fire, building connections and fans along the way.

Since the onslaught of the coronavirus quarantine, Arsena turned their work from the stage to their home, where they wrote and recorded their latest EP Dawn of the Second Sun, sent the songs to Ben McLeod of All Them Witches for mixing, and forwarded them to Mikey Allred of Dark Art Audio for mastering. The songs have been praised by Glenn Fricker of SMG Studios, the New Wave of Old School Thrash Metal YouTube channel, and Fred Durst of Limp Bizkit. The EP gained traction quickly and landed Arsena interviews with webzines such as Greece’s “Filthy Dogs of Metal” and Lithuania’s “Diovim,” providing the world with a closer look into the minds of the bands members.