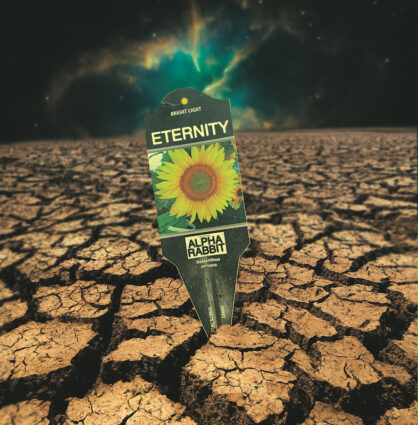 A three-piece band that is like The Beatles of punk rock for NJ, with vocals from both the female and male perspective along with songwriting that is tough to pin down as just punk. But for sure it has that punk vibe, ethic and grit. – Sam Lowry | Blood Makes Noise

In 2016, three Central Jersey musicians met up for a one-off songwriting workshop and almost immediately agreed to make it an ongoing collaboration. Jake Foy, Joe “Dim” Wolstenholme and Jaime Parker flawlessly transition between bass, drums, guitar, and keyboards, embracing their collective indecisiveness to explore musical genres and reflective themes. Two EPs, two US tours, and hundreds of performances later, the three friends still love playing music together and their joy is contagious. Each brings slightly different styles to the table, but their combined influence creates songs that are dynamic, energetic, fun, and thought-provoking.

Alpha Rabbit’s new release, Eternity, explores wrestling with abrupt changes and discovering that moving forward happens in the moment, not some distant future. Recorded at SRG Studios in Hamilton, NJ with Sean Glonek, the songs are equal parts psychedelic, punk, pop, dance, and rock with a sprinkle of twang. Eternity is a celebration of our imperfections, a reminder that nothing is permanent, and a battlecry to live today and always love.

“If Elvis Costello had three heads and one of them was Evan Dando and the other was Juliana Hatfield” – Dave Locane | Millhill Basement, Trenton NJ

“The trio of Trenton veterans Jaime Parker, Jake Foy, and Joe Wolf create punk-indebted indie rock with a sense of nervous urgency. On stage, Alpha Rabbit is an absolute blast to behold, with all three members displaying their prowess by switching instruments…sometimes even mid-song!” – Brian Erickson | You Don’t Know Jersey

“You want some straight FIRE rock and roll? THIS IS IT!” – Nick Twist | Life With a Twist