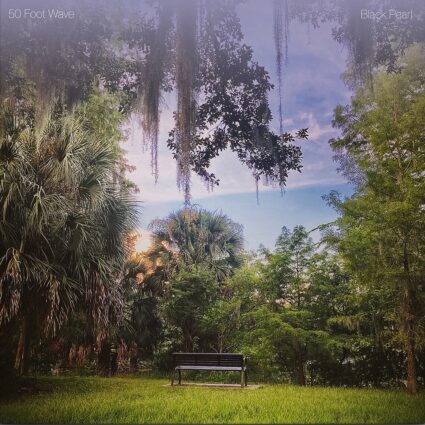 “A GROUP THAT RUNS LAPS AROUND MOST ROCK BANDS” – PITCHFORK

“The song starts out at a low simmer before growing bigger and louder and more intense, and it’s cool to her Hersh cut loose on something so psychedelic.” – Stereogum

Like passing comets, releases by 50 Foot Wave are few and far between; their hypnotic mixture of ice-cold uneasy listening carefully warmed into its own unique sound by the sun. They are traveling to other dimensions, an unyielding triad that creates a sound so much bigger than the wave they surf.

Last sighted with 2016’s ‘Bath White’ EP and before that in 2011 on the ‘With Love From The Men’s Room’, 50 Foot Wave return with ‘Black Pearl’, as its title might suggest; an anomaly, a rarity, a gem. The title refers to the neighborhood in New Orleans where the record was written.

50 Foot Wave, is Kristin Hersh’s ‘other’ band (active since 2003, with fellow Throwing Muses’ member Bernard Georges on bass and drummer Rob Ahlers). They are ever changing, enigmatic, flashing between moods, leaping walls of sound. From their very beginnings, the trio have been hailed in various quarters as “an outlet for the material deemed too weird or wild for Throwing Muses”, their “menacing, stalking, spirals of lean, hungry riffs, set alight” as “feedback rips into the fragile melody.” Detuned and discordant at will.

Where the Muses are articulate visionaries and Kristin’s solo material is introspective and tactile, 50 Foot Wave continue to traverse the rigid tension of their own sound.

Kristin is on a solo TOUR now, contact us with any requests.