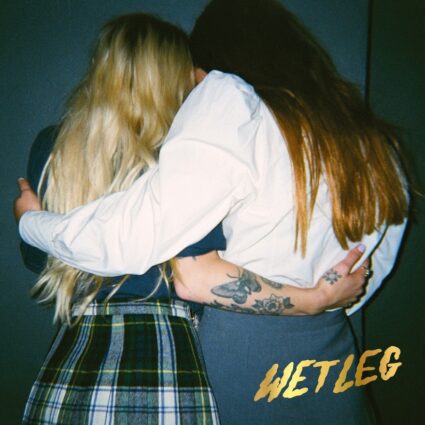 “The British indie rock duo have hooks stuffed with bait and a keen eye for assessing self-delusion. Their debut is the sound of two women stoking mutiny from a slow descent into madness.” – Pitchfork (7.2)

Stereogum: Album of the Week

“I am really excited about Wet Leg. Wet Leg are about to take over America”-DAVE GROHL

“Few bands in recent memory have stirred up a storm of attention as quickly as Wet Leg have over the past year… the band’s winning mix of deadpan humor and eclectic musical style arrives so fully formed that comparisons to bands who have come before feel half-true at best.”-PASTE

After releasing two of the hottest singles of 2021 (“Chaise Longue” and “Wet Dream,” Wet Leg’s Rhian Teasdale and Hester Chambers were catapulted from their confines on the Isle of Wight to sold out venues across the UK and packed-out tents at festivals causing giddy excitement wherever they went. Now, the duo is thrilled to unveil their debut album. The album is called Wet Leg.

Wet Leg was recorded and produced in the main by Speedy Wunderground’s Dan Carey (“Chaise Longue” and “Angelica” were produced by Jon McMullen and Josh Mobaraki respectively). The album was mostly recorded in London, in April 2021, meaning they had a finished album before the world had even heard debut single “Chaise Longue” or played live. “I guess how it happened was unconventional,” admits Hester.

Right from the start of Wet Leg, Teasdale and Chambers focus was fun, and a dry sense of humour ripples through the album. “I wanted to write fun songs, I didn’t want to indulge sad feelings too much, I wanted to write stuff that’s fun to listen to and fun to play,” reveals Rhian. “But then, the sad seeps through, as well.”

Wet Leg is sad music for party people, and party music for sad people. It is cathartic and joyful and punk and scuzzy and above all, it’s fun. “Wet Leg was originally just supposed to be funny,” says Rhian. “As a woman, there’s so much put on you, in that your only value is how pretty or cool you look. But we want to be goofy and a little bit rude. We want to write songs that people can dance to. And we want to people to have a good time, even if that might not possible all of the time.”