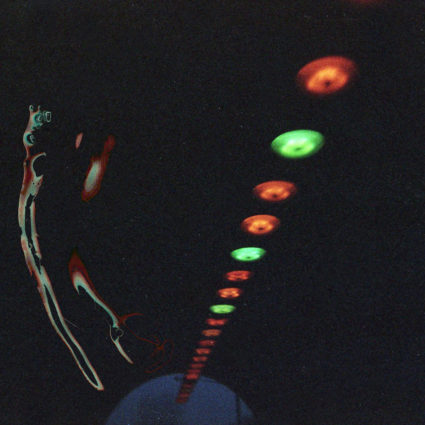 Alt-rock band The Technicolors have returned with the release of their fourth album Cinema Sublimina. The latest release is a vessel of feel-good psych-rock and indie-rock that perfectly paints the natural beauty and synergy of Arizona’s wonders. “DJ in Brazil,” one of the album’s experimental dance-funk tracks featuring Mateus Asato, was premiered this week on ALT-AZ 93.3 in anticipation for the Cinema Sublimina release. Among the album’s tracks are other highly acclaimed singles including “Howl,” “Dress Up For You” and “Nightvisions,” which was released last month.

Their latest single “DJ in Brazil” was influenced by the contrast between the unfamiliar lands of Brazil and the Arizona desert:

“We had just returned from being on tour in Brazil, where Austin [Scates] and I had extended our trip after the shows to stay on a farm with some friends. We all ended up back in the studio two days after returning to Arizona, in hopes of capturing some of that dynamic shift between a place so vibrant and unfamiliar and the desert, where we all grew up and that sensation of being on your toes is often hard to come by.” – Brennan Smiley of The Technicolors

Sonically, the experimental production of the track features intricate bossa nova guitar work from on-the-rise guitarist Mateus Asato whose viral Instagram account caught the attention of popular artists Tori Kelly, Jessie J, and Bruno Mars for their respective tours. Guitar.com considers Asato as one of the most exciting young guitarists in the world.

While the LP may not have started out as a concept album, it ended up becoming a story that reflective of the dissociation of reality. Tied together, the project’s personal thoughts are a battle between mind and body:

“Cinema Sublimina is a blurry collage of all the moments in life that feel ‘rigged.’ We never intended to make any kind of concept record but we most definitely ended up with a story arc that, to me, sort of reflects the way things feel when you walk out of a movie theater or a play… as if you just witnessed another dimension flash before your eyes. Also the idea of a ‘concept record’ is sort of funny because growing up I’d mostly see it within progressive rock bands or Rush or something. I think once we realized there was a flow and a common theme happening we sort of leaned into it, maybe because it feels like the way people consume music nowadays is much more single-based.” – Brennan Smiley of The Technicolors

In a time where singles dominate the music world, the band is proud to find a footing where they could put together a cohesive body of work that was focused on a single story:

“As a four-piece rock band, it’s been exciting to navigate the musical landscape and figure out the best way to do our thing in the most compelling way to us – and believe me, we’ve released music in just about every way you can – but I think it the idea of releasing any collection of songs with a common theme or story has actually made the idea of an ‘album’ become more valuable. Like, what’s the point of having an ‘album’ with a bunch of songs on it if they don’t mean anything together?” – Brennan Smiley of The Technicolors

Since introducing themselves in 2012, Arizona’s The Technicolors have woven a luminous sonic tapestry of fuzz-fueled riffs existing somewhere between the gloomy echoes of 90’s Britpop and the snake-charmed stars of the Sonoran desert. The band’s vast and diverse catalog is highlighted by a slew of critically-praised singles, including: “Space Cadet,” “Tonight You Are Mine,” “Neon Roses,” and “Songbird.”

The band has been fortunate to share the stage with an impressive roster of genre-spanning artists including Matt Maeson, The Maine, Turnover, The Wrecks and Psychedelic Furs.