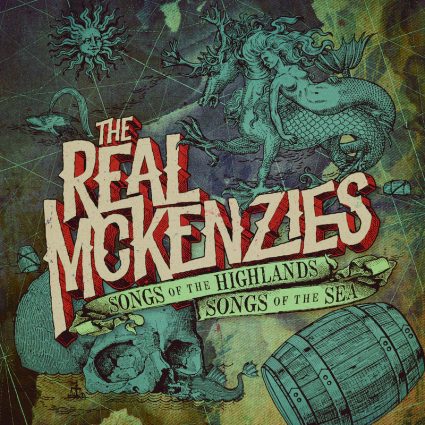 You know these songs. Even if you’ve never even been to Scotland, even if you’re not a seafaring type, you know them. That’s because the twelve anthems—and make no mistake, these are anthems—The Real McKenzies have picked for this new album have been sung by others for decades, if not centuries. A dual celebration of Scottishness and the band, which is celebrating its 30th anniversary this year, Songs Of The Highland, Songs Of The Sea drops on Fat Wreck Chords on November 18th and is comprised entirely of famous traditional sea shanties that are roughly divided, as the record’s title suggest, between land and sea. And even though the idea for the album was initially proposed by guitarist Mario Nieva, these songs speak to frontman Paul McKenzie’s heritage as well as who he is, and who he always has been. Some might have been written long before he was born, but these are still his stories, wound inextricably into his life experiences.

“Mario thought we should attempt to do this,” he explains. “It wouldn’t take a lot of time in terms of writing, because all the songs were already written. In fact, most of the songs are ancient. They’re really old. I myself, being completely nautical, unfortunately due to the pandemic, had to sell my ship, because I just simply couldn’t afford it, much like Angus Walters, who sold The Bluenose. That ship is on the Canadian 10 cent piece, so every Canadian can have reference to that piece of history, although a lot of Canadians now don’t give a shit now, or don’t know.”

To some extent, these songs are their own references to that history, brought up to date by the Vancouver, BC-based band and given a Celtic punk makeover. How else could it start, then, than with the “Scotland The Brave”? But here, its recognizable bagpipe melody soon gives way to—and then joined in unison by—electric guitars in a perfect confluence of past and present. That’s the pattern throughout this record. Old songs are imbued with new relevance for these modern times, and delivered with the kind of intensity and passion that only someone in tune with the history of the music and the country could deliver so emphatically. As the only constant and remaining member in the band’s history, he does so with a relatively new collection of merry music makers, but it sounds like they’ve been playing together for years and years. (continue reading full bio on DISCO)