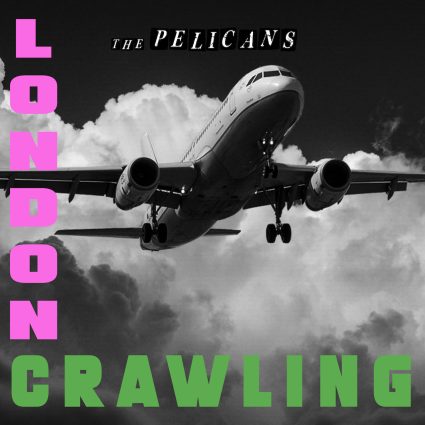 the Pelicans were a NYC quartet fronted by Ari Vais in the early 2000s. The band consisted of Ari’s junior year abroad to the UK pals Joe Rosenthal (bass + guitar, from Colorado) and Blain Kennedy (bass + guitar, from Wisconsin). Ari Vais played guitar, wrote the songs and sang, and the group was rounded out by multi-instrumentalist, and producer, Art Tavee on drums. Years later Ari Vais became the frontman for The Campbell Apartment which started in NYC and ended up in the 2010’s out in San Francisco. The Pelicans first resurfaced in the digital streaming era with a few tracks on “The Very Best Of Ari Vais and The Campbell Apartment” and soon after plans were made for the Pelicans full discography to be released.

The new release is a combination of ‘Dangerous Love’ EP and ‘London Crawling’ EP:

“Dangerous Love, recorded by the Pelicans‘ own Art Tavee – largely in his NYC apartment – expands on the promise of that first effort with a batch of six new songs that showcase Vais & Co.’s heralded knack for turning out catchy and intelligent pop rock.” – The Big Takeover on Dangerous Love

“London Crawling displays a new, dramatically effective lower-register style of singing for Vais and his new bandmates in the Pelicans know how to create sparkling, sophisticated arrangements for catchy pop choruses or bash out a maelstrom coda, depending on what the track dynamic calls for. More good news is that Vais hasn’t lost his touch for spinning hook-filled pop songs and every tune here is a winner. Guided By Voices / Sebadoh / Strokes fans, you can’t go wrong with this.” – The Big Takeover on London Crawling

“All at once melodic, chaotic and literate…One of my favorite songwriters” – Chris Collingwood, Fountains of Wayne

“Their sound seems to come from the days of The Wedding Present and The Chills. It’s nice to see some of that good ole’ indie sound is still being played out today.” — Crashinin

“The Pelicans sound like the Clash fronted by Jonathan Richman — the power of the music leavened by the wryness of the lyrics. Underlying that tension, however, is an emotional richness that repeated listenings — and you will listen repeatedly — reveal.” – Anthony DeCurtis