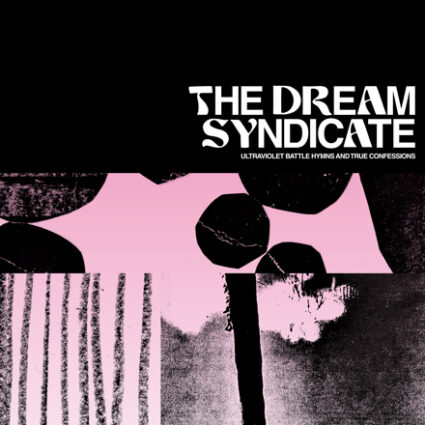 “THIS DREAM ISN’T OVER.” – CLASSIC ROCK

When the Dream Syndicate emerged in the early 80s, frontman Steve Wynn declared that “we’re playing music we want to hear because nobody else is doing it” – he added, “I’ll comprise on what I eat or where I sleep, but I won’t compromise on what music I play.”

Both were true, although their template of Velvet Underground meets Crazy Horse may seem commonplace today (and let’s not forget, the Syndicate spawned many imitators), their raw twin guitar, bass and drums approach was not common during an era when slick polished MTV bands ruled. The band was uncompromising.

Throwing out any preconceptions on the cryptically titled: ‘Ultraviolet Battle Hymns and True Confessions’ is different to what you’ve heard previously.

A vintage Krautrock electronic synth opening on lead single ‘Where I’ll Stand’ blends into a classic Dream Syndicate vibe – not unlike “Tell Me When It’s Over” that kicked off The Days of Wine and Roses – with touches of Bowie’s opening song on Scary Monsters “It’s No Game”.

“It feels like an attempt–via the lyrics and the circular chord progression–to impose some kind of order and logic on a world that was severely lacking in both respects at the time.” – Steve Wynn

Transporting you to Santa Monica Boulevard circa 1976, ‘Damian’ has a Californian sun baked sheen with a New York City bred sense of evil and a Steely Dan feel to it or if we transport it to the other side of the Atlantic; touches of Roxy Music’s “Ain’t That So” – the Dream Syndicate have moved well past their early Velvet Underground influences and taken on British glam, German prog, and more.

“I wanted to write and record something that would have sounded good coming out of the Radio Shack speakers in my Gremlin… the sense of mystery and time was enhanced by Marcus Tenney’s era-perfect sax and trumpet work and then sweetened by a backing vocal arrangement Stephen McCarthy brought to the session.” – Steve Wynn

‘Ultraviolet Battle Hymns and True Confessions’ takes the more traditional song writing elements of the band (as shown in the first two reunion albums) and combines it with more experimental. Give it a listen and decide what you hear – whatever it is – it won’t be anything like you’ve heard from The Dream Syndicate.

The Dream Syndicate will be touring the US and Europe this summer – contact us with any requests!