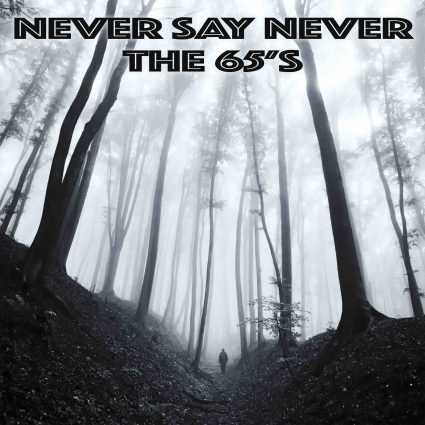 The band started around 2009, releasing their acclaimed debut Strike Hard! on Dromedary Records. A video for the first single “Walk On Selfishly” came soon after, premiering on Magnet Magazine. Their politically bent material made them a standout in the popular melting pot scene bubbling out of Maxwell’s in Hoboken, and they formed alliances with other local upstarts Miss Ohio and Galanos and began releasing under their own label Pyrrhic Victory Recordings.

Comprised of Joe Pugsley (guitar, vocals), John Steele (drums), Ryan Struck (bass, backing vox) and Ed Roessler (guitar), the band has set a relentless pace of playing shows over the past decade, canvassing the Tri-State area. Their output of material has been just as steady. From 2013 to 2017, The 65’s released 3 EPs, along with a myriad of split releases and collaborations.

Their new 3 song EP, Never Say Never, pushes their sound to new heights, while cementing their reputation as a fiercely independent working-class band. Recorded at Homebrew Studio in Sparta NJ with producer/engineer Kevin Lacatena, the songs are sharp and concise, yet are sure to leave the listener ruminating on their meaning long after the needle is lifted.