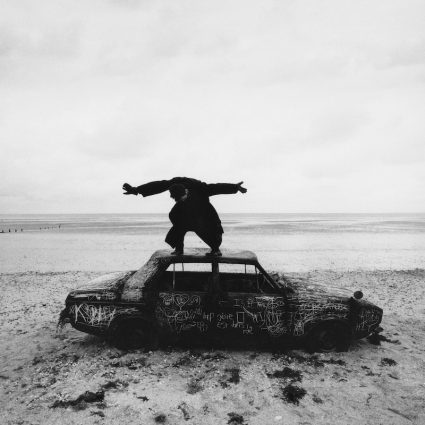 The 1975 - Being Funny In A Foreign Language

“(their) most focused album yet, one that perpetuates a simple message: Love will save us. It’s cliché, it’s obvious, it’s slyly profound—it’s the 1975.” – Pitchfork Album Review (8.0)

“‘Being Funny In A Foreign Language’, like most of their projects, has something for everyone, but this time does stay in one lane – and that’s for the better.” – Clash

“They’ve returned with an album that feels far from the all-encompassing anxiety of their previous records, prioritizing the unity and spirit that all four members feel for each other.” – Consequence

“It’ll make a lot of people happy. It sounds like it made the band happy too.” – SPIN

After four studio albums, there’s not much territory The 1975 hasn’t covered at this point. Throughout their tenure as a band, the English rockers have flirted with glossy pop, anarchist punk, gritty garage rock, electro-funk and country. They’ve used their incisive songwriting to ask existential questions surrounding self-discovery, nihilism, climate change, mental health, addiction, post-modernism and cybersex. So what’s a band to do when they’ve seemingly done it all? After 20 years together, The 1975 decided it was time for a return to form—a way to celebrate their beginnings and showcase their growth. The result is their fifth effort Being Funny in a Foreign Language—perhaps the band’s most intimate sounding record yet.

After two years in a pandemic where technology was a means to cope with isolation, the world—and the band themselves—seemed to be searching for raw moments. Being Funny tries to do just that, grappling with love and loss in the post-internet age. “I feel like people are craving things that are remarkable that require as little technology as possible,” says bandleader Matty Healy.

While The 1975’s past few records were brimming with massive production—programming and synths— Being Funny is rooted in performance. “We wanted it to capture the performance of all of us, allowing people to be a witness to a moment as opposed to a witness to some constructs.” As a result, it’s much of a departure from the maximalism of their last record Notes on a Conditional Form. “This album, more so than Notes, is a follow-up to A Brief Inquiry. There were conversations about whether it was literally a part two or something like that, but it was very much his own beast by the end.”

Being Funny is somewhat of a rite of passage for The 1975. Healy, four years clean from heroin, left his identity crisis of his 20s behind and felt completely settled into his career as a writer; while lead guitarist Adam Hann had his first child. The band has grown up, and in a lot of ways, settled down. “We’re men now, we’re f*cking good.” And notably, Being Funny was the first time The 1975 made a record without strife or addiction getting in the way. With maturity came clarity, and it allowed the group to be more present than ever. “It was the first record where I was like, ‘Fuck it. I’m just going to be here now,’ which is why it turned into sounding more coherent than previous records.” With Being Funny, the band realized their albums didn’t need to broach every topic at once, instead, they could equally be as affecting as contextualized snapshots of a certain period in time. At this juncture, Healy found himself contemplating whether the concept of true love is possible in a world where we’ve been sold this idea of sentimentality. “Are these earnest things like love and connection and community and wanting possible—and are they obtainable against this neoliberal hellscape that we live in?”

Recorded between England’s Real World Studios and New York’s famed Electric Lady Studios, Being Funny was the first time The 1975 had sat in a room and played as a band. And this time around, they set some ground rules: They wanted everything to sound as organic as possible, opting for more strings and fewer synths. “We started taking songs that existed or just were a bit confused in their identity and doing an impression of The 1975. But this time, it was live.” They also decided to enlist an outside producer: Jack Antonoff. “I would have never thought that another producer would have come in, especially not a producer that was ‘hot and happening.’ All the people that I’ve worked with, I’ve worked with my whole life.” But their mutual admiration for one another helped propel the project forward. “Jack is just really good at getting the best out of artists, so I really liked working with him.”

But the band didn’t change everything, exactly. Like its past four records, Being Funny begins with the band’s familiar—but always differentiated—”The 1975” intro. Flanked by two twinkling pianos playing out of time, the reconfigured opener serves as a stream of consciousness that bursts into a tense, beautiful drone. (continue reading full bio on DISCO)

NOTE: Full album will be on DISCO on 10/14, head there now for all advance singles + radio edits!