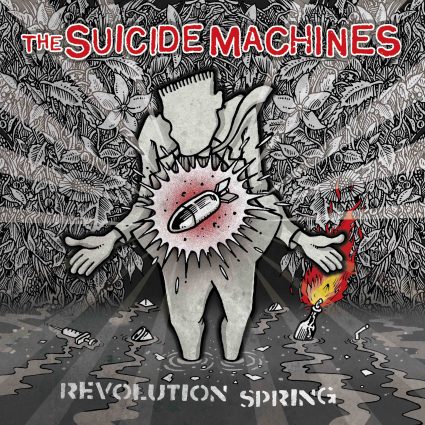 It was in 2006 that Detroit punks The Suicide Machines called it a day after 15 years and six full-throttle, super-charged and confrontational albums. The break didn’t last too long – in 2009, the four-piece reconvened to play the occasional local shows and embarked on a handful of tours. Finally, the band is back with a brand-new album- the first since War Profiteering Is Killing Us 15 years ago! Revolution Spring, the band’s seventh album and Fat Wreck debut, picks up right where they left off – full of blistering, rousing songs finding the band in truly explosive and energetic form.

Over the course of a couple of years, the band wrote a total of 30 songs. With the help of both Less Than Jake’s bassist Roger Lima, who produced Revolution Spring, and The Code’s frontman Marc Code, The Suicide Machines whittled those down to the 16 that make up this record. While on the one hand, these songs serve as an overview of the band’s career and the different permutations of punk they’ve dabbled in over the years, it also possess the energy, spontaneity and enthusiasm of a band many years their junior – albeit with the wisdom that comes from being alive for a few decades. Recorded in “about 12 days” at Rancho Recordo – the studio run by Marc Jacob Hudson, (Laura Jane Grace & The Devouring Mothers) – Revolution Spring is a powerful and cohesive combination of hardcore, ska and anthemic punk rock.

While Revolution Spring harnesses the belligerent energy that has defined The Suicide Machines since their inception, there are two marked differences this time around. The first is that these songs are particularly personal. The personal component is especially obvious on “Trapped in A Bomb”, a poignant ode to a close friend Jason Navarro lost to suicide that made the singer open up lyrically, perhaps more than he ever had before. The second overriding difference on this album is the (relatively) newfound optimism possessed by the singer. That’s not to say The Suicide Machines aren’t pissed off on this record, let’s be clear on that point. Opener “Bully In Blue” is a breakneck anthem that rallies against police brutality; the jaunty, ska- punk tones of “Babylon of Ours” overlay a harsh indictment of capitalism and American imperialism, and “Flint Hostage Crisis” is a brutal takedown that addresses the lack of clean water in that city – and the fact that nothing has been done to address it. ‘This is what class war really looks like’ snarls Navarro viciously at the end of the brief, belligerent track.

Old and new fans alike will find Revolution Spring an energetic homage to the band’s past anthemic, hardcore, ska-punk roots, mixed with the newfound optimism and raw personal life experiences of the band.