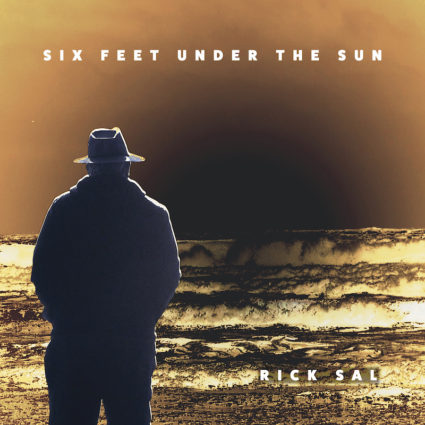 True art is a labor of love. Texas artist Rick Sal has marched along a winding and unique path toward a body of creatively dedicated work — a charming eleven-song album of artistic boldness and lyrical ingenuity.

Sonically, Six Feet Under The Sun is lyrically driven rock, sometimes drifting towards country and even alternative vibes. The project was assembled over several years, with most of the recording taking place in Sal’s RV, affectionately christened “Winnabagel Studio”. Sal traveled across the USA, searching for inspiration and stopping for extended stays in Texas, Colorado, North Carolina, and Washington. The result is a collection of musical postcards that capture an artist alone out in the field exploring travel and creativity.

Six Feet Under The Sun is the byproduct of both life’s vagaries and its sometimes incessant grind. Sal’s first release was in 1988. As Sal began work on his second album, a job layoff steered him in a different direction, and soon work responsibilities, children, and other adult layers took over and consumed every moment. Though Six Feet Under The Sun was ultimately recorded on wheels, the album was first written in this period at home via stolen hours and spare weekends. When Sal’s last child headed off to college he knew the time was right to finish that sophomore album. Since then, Sal has been musically active as ever – from producing an album with Dallas/Fort Worth band Good Latimer to self-recording this new collection of eleven eclectic songs, Sal has creatively and physically been on the move.

With a few exceptions, Sal plays most of the instruments on the album – the result is something unique, fresh, and very much his own. “No Love Songs Today” has a rolling bass-line straight from mid-eighties Sting and The Police. “Just Like a Fine Wine” has a gentle singer-songwriter plod, a strong narrative running through the lyrics, careful and delicate guitar lifting the track. “Rest Stop”, by contrast, is decidedly more upbeat and narrates a snapshot of Sal’s unique adventure out on the road. There is a story to be unlocked through this record, rich lyricism that embodies life and creative freedom.

Head out on a journey, embrace change, and see where creativity takes you. Check out Rick Sal’s Six Feet Under The Sun, today.