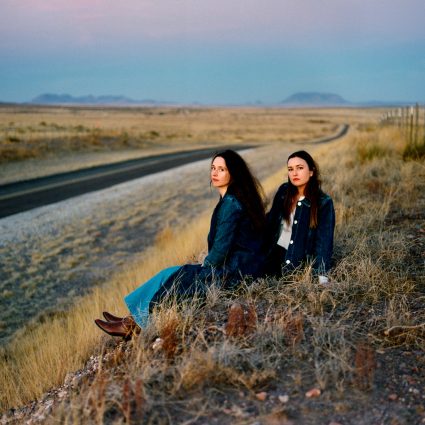 Plains - I Walked With You A Ways

“Katie Crutchfield and Jess Williamson embrace their roots, as Plains. Their joint project explores a spectrum of country influences and lets them reckon with their pasts.” – The New York Times

“For her new project with Jess Williamson, Katie Crutchfield fully steps through the door she opened with 2020’s Saint Cloud, embracing her twang and Southern charm. Williamson’s prose complements Crutchfield’s tone, their songs imbued with the wisdom of those who made mistakes and managed to survive.” – Pitchfork

“A songwriting force to be reckoned with” – NYLON

“An instant hit that already makes Crutchfield and Williamson’s plan to only ever make one project together seem all too brief.” – The FADER

“Crutchfield and Williamson apply their honeysuckle drawls to one of the biggest, stickiest hooks that either of them have written” – Stereogum

Waxahatchee’s Katie Crutchfield and Jess Williamson have announced an album titled I Walked With You A Ways for their new collaborative project, Plains, alongside the release of a video for the album’s lead single “Problem With It.” The record and its accompanying North American tour, also announced today, is a one time only collaboration, which makes Plains incredibly special. It’s a moment in time, to be enjoyed right now before the project evaporates forever.

Crutchfield tells us “I’m thrilled to announce this new project and album. I’ve felt a connection to Jess’s songwriting and a kinship with her since we met years ago. Getting to lean into the influence of the music we both grew up with while also making something that feels very current and fresh to me was a great experience and I’m so happy to finally share it.”

Williamson adds “Making this record with Katie was a deeply expansive experience for me as a songwriter. I really trust her ear and sensibilities, and she encouraged me to explore aspects of my songwriting that in the past I’ve shied away from. Katie’s support was so important for me as we wrote this album. We gave ourselves permission to lean into the music that raised us and write the kind of classic timeless songs that we both grew up singing along to. For me that was The Chicks and Dolly Parton, and having a place to channel those influences was an absolute blast. My hope with Plains was to tap into something Universal. I love the album we made, and I’m so excited to play it live.”

In their solo endeavors you hear a specificity of experience that is so sharp and intimate that it brings the listener into a personal side of the experience of life. With Plains, we are invited into this spaciousness of story, to a shared narrative. There is an essence of their own friendship that clearly emerges that is just as much about joy and playfulness as it is about two people ushering each other through life’s great journeys.

Country music acts – from Waylon and Willie, to The Judds, The Chicks, Trio, and beyond – are groups that are formed out of family and friendship, which lyrically take their listeners on a voyage of sorrow and hope. Similarly, Crutchfield’s sharp, honest edge of truth telling paired with Williamson’s ability to paint the scene shine through on I Walked With You A Ways.

Written between Kansas City, Los Angeles, and Marfa, the album was recorded in Durham, NC with collaborator and producer Brad Cook. The creative magic of only a few vocal takes, tracking with a band comprised of Spencer Tweedy and Phil Cook, gives the album a feel of fresh, on-the-spot conception. The trust and history of Crutchfield and Cook’s collaborations (Saint Cloud, Great Thunder EP) set the tone for this new container of spontaneity and experimentation.