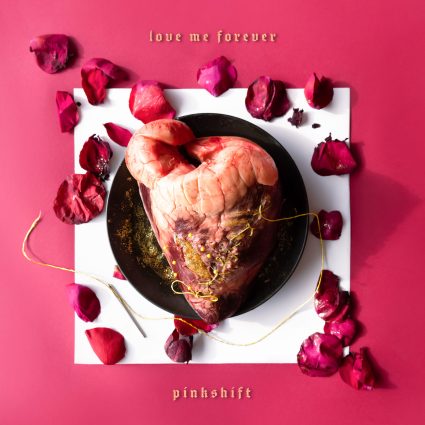 “Through fiery riffs, pointed lyrics, and the infectious spunk of lead singer Ashrita Kumar, Pinkshift make music that demands to be heard.” – Consequence

“Punk bands have taken a stand against subjugation and Pinkshift continue the legacy by kicking back against their modern oppressor; smartphones and social media.” – FADER

“Vocalist Ashrita Kumar is a badass force of nature.” – MTV

“both instrumentally and emotionally explosive, blending pop-punk hooks with the fiery intensity of riot grrrl and post-hardcore.” – Paste

“It’s three minutes of pummeling, pit-ready catharsis. ” Vulture on “nothing (in my head)”

“a soaring and angry song…that feels like it was shot from a cannon. ” – Stereogum on “nothing (in my head)”

Forming in 2018 while they were students at Johns Hopkins University, Pinkshift have experienced significant landmarks in their career to date – the video for Saccharine’s “i’m gonna tell my therapist on you” went viral, they’ve supported PUP and Mannequin Pu*sy on tour, have been featured in The Guardian, Kerrang!, Stereogum and Alternative Press and sold out their first ever headline show at Baltimore’s Ottobar – but it’s just the tip of the iceberg as anyone who has seen their highly energetic, whirlwind and very sweaty live shows can attest.

Unlike, Saccharine which was written over a period of a few years, Love Me Forever was a more concentrated effort, mostly written during the pandemic. “We were concerned this wouldn’t feel like an actual album,” admits Kumar, “but because we all worked on it together throughout this period of time, it feels really cohesive. It defines an era of our lives.” Adds Houngbedji, “with everything that’s going on – both in the world and in our own lives – it feels like it was a very transitional period that influenced what we were writing about. They all have similar themes.” It’s not just a no-holds-barred reflection of the state of the world today, however. It’s one delivered from a unique point of view within a music scene that’s predominantly white. It makes Love Me Forever all the more important. (Continue reading full bio on DISCO)