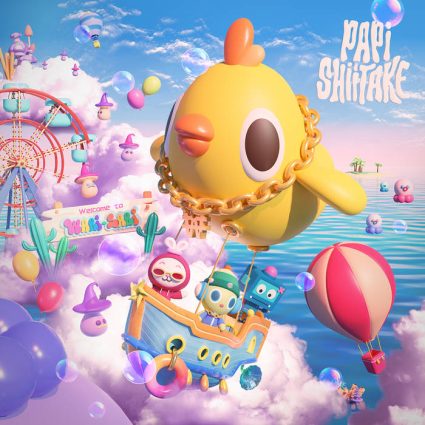 Authenticity in music can feel a bit rare these days. Thankfully, radiant exceptions are still out there. Fueled by an unflinching appreciation of life, an outsized diet of anime and a rock solid understanding of how to craft a great song, Papi Shiitake is on a singular mission: transport his listeners far away from the daily grind. Even if for just a few moments at a time.

Employing lush, hypnotizing guitars, reverb-drenched melodies, and an arsenal of diverse, heady instrumentation, the NYC-based dream-pop singer/producer spins a web of 60’s inspired dreamscapes that bring the tensions down and the tranquility up. His sound lies somewhere between Mac DeMarco and Pharrell: giant laid-back, intoxicating vibes that surprise and inspire.

Early supporters include MTV Spankin’ New, Music Choice, websites like American Songwriter, Earmilk, Under The Radar and Atwood Magazine. His music has been featured on popular TV shows like 9-1-1, Seal Team & Single Drunk Female and has racked up thousands of views and streams across YouTube and Spotify. Following his well-received 2021 EP, Quarantine Dream, Papi Shiitake is unveiling his debut LP, Wabi-Sabi. Over a year in the making, the album was mixed by Brandon Bost (Florence + the Machine, HAIM, Miley Cyrus, Taylor Swift, Lady Gaga) and mastered by Ryan Schwabe (Tierra Whack, Oneohtrix Point Never, Beach Bunny) which has elevated the songs to even greater heights. Arriving via burgeoning boutique indie label, Trash Casual (Elijah Wolf, Dead Tooth, Joudy), the album is poised to bring Papi’s larger-than-life vision to his largest audience yet.