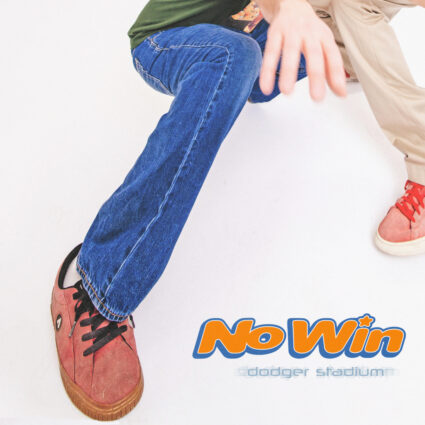 Under the moniker NO WIN, Danny Nogueiras blurs the lines between power pop, punk, and good old fashioned rock and roll. He grew up playing music as a kid, so it’s been in his blood his whole life. But it wasn’t until he moved to Long Beach in 2008 that his passion started to resemble a career. Around that time, he toured in emo and Americana bands, performing DIY shows around the American West. Nogueiras was also working in a Los Angeles recording studio with people who were in up-and-coming LA bands. Watching the livelihoods of the musicians around him take off motivated Nogueiras to aim his ambitions a little higher. “I was, like, ‘oh shit!’ I saw my first taste of what being in a band could be,” Nogueiras says. “That was the first time I was around people that were making cool art and were living on it.”

After moving from the suburbs into LA proper, Noguerias cut his teeth recording bands in makeshift spots around the city. He eventually toured with the SWMRS-adjacent act Waterloo Teeth and engineered projects by bands like Built To Spill, The Regrettes, Together Pangea, Little Joy, and many more. He founded NO WIN as a solo act in 2015, after the dissolution of a former band he’d been playing in. “I started NO WIN as a way to write songs, put them out, and not think about it,” he says. “My music sounded lofi and I owned a studio. It was more about getting the material down.” It wasn’t until Noguerias signed the project to the legendary LA label Dangerbird that he started to take NO WIN more seriously.

NO WIN’s 2019 debut, downey, found Nogueiras fully embracing his rocker background. With its energetic arrangements and hooky songwriting, the record presented 29 minutes of leather clad, sweaty energy. The project’s latest, Dodger Stadium, builds on that formula, but fleshes it out with increased complexity. “Grow Out Of It” pairs an Oasis-y melody with a sauntering hip hop rhythm. On “New Year,” a trebly riff rests atop a whiskey-soaked instrumental. “Time Killer” is lively, and captures a slice of the SoCal sound that is so crucial to the project’s roots. “I was listening to a lot of Hüsker Dü and I kind of wanted to get into this, like, heavier version of poppy rock stuff, but with darker sounds,” Nogueiras says. Alongside that, he was drawing inspiration from some goofier music, like Sugar Ray and Third Eye Blind. You can sense that dichotomy on Dodger Stadium. These latest tracks certainly pack a punch, but they always remain lighthearted, approachable, and fun.

Noguerias currently runs Balboa Recording Studio in LA’s Glassell Park neighborhood, and his seasoned production chops really shine through on the album. downey was already pretty polished and sonically impressive, but the recording space feels like more of an instrument on Dodger Stadium. The record was co-written by Jeff Enzor (Joyce Manor, Merry Christmas) and David Jerkovich (Deep Dreem, Ill Lit, Kind Of Like Spitting). Jerkovich also helped produce the project and runs Balboa with Noguerias. On the opener “Hit The Line,” chunky synth basses support peppy piano chords and soaring, confident melodies. “Surfing” utilizes a pitch-manipulated dial-up modem sample and a funky, vinyl scratch-driven drum break to support a repeat refrain. “Why is it so hard to live in these modern times?,” Nogueiras ponders over the beat, which brings to mind The Avalanches or MF Doom. Best of all, on “Crook,” a whirring electronic groove lays the framework for a crystalline, country-tinged guitar riff. Nogueiras’ rowdy artistic roots are still on display, but with this record, NO WIN’s musical aesthetic is a lot less easy to pin down. (continue reading full bio on DISCO)