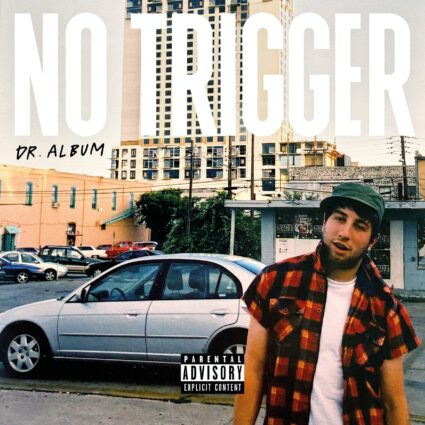 No Trigger Share an Anthem for Anyone Not Inked Up with “No Tattoos” The single and video arrive ahead of the punks’ first album in a decade, out August 26 via Red Scare. – FLOOD

Dr. Album is a very atypical project, so it calls for a very atypical band bio. Some folks from the underground music community chimed in (punk points!) and we even let the hacks at the label take a swipe at describing this wacky punk rock chimera. Let’s start with them:

It’s been ten years since No Trigger gifted the world a full length. TEN GODDAMN YEARS. But all that is about to change with the release of 2022’s Dr. Album. They’re the first sextet on Red Scare (we think?) and the biggest thing to come outta Worcester, MA since Bob Cousy. These guys have played all over the world (Europe, Japan, South America, Australia, etc.) and made their name perfecting melodic hardcore, but this new 13-song record has something for everyone. Dynamic indie-punk of all stripes can be heard on Dr. Album, and this doctor has an IV bag of hooks, choruses, melodies, and ferocious lyrics that you’ll wanna inject straight into your veins. Side note: Did you know that Emma Goldman opened an ice cream shop in Worcester (AKA Wormtown) back in the 1800’s? It’s true, and Saint Emma would be proud of these scrappy punks and this Left-Wing masterpiece. It may have taken a decade, but No Trigger is relentless, and the band is playing Riot Fest, Punk In Drublic Festival, and shows with The Lawrence Arms in support of these new songs. Onward and upward!

Now for the star power and scene luminaries! Read on:

“Not since the glory days of the first couple of PROPAGANDHI albums, has anyone married the sophisticated pop- punk melodies of a NOFX or BLINK 182 at their prime, with a sharp political acuity and snotty snark worthy of BILL HICKS proudly sporting an Antifa shirt. NO TRIGGER are actually even better than that, as you’ll soon discover.” – Ramsey Kanaan | Founder of AK Press and PM Press

“Their most melodic and immediate release yet. I’m ready to submit to the Acid Lord.” – Sam Russo | Solo Artist and Wizard from the British Isles

“When I first heard there was a band called No Trigger with an album called Canyoneer all those years ago, I was like, “I don’t need to listen to that, they sound like they’re awesome and I’m still too fragile to deal with an awesome band in the same vein as my band.” Welp, a decade has passed and I finally got brave enough to listen to them and ummm… well, I was right. They’re awesome. This whole new record reads like a drug-fueled Antifa riot that takes place on the ashes of the Warped Tour. Hide your sons, hide your daughters, and hide your drugs (specifically acid) because No Trigger has arrived and they’re just absolutely out of control with this Dr. Album.” – Brendan Kelly | The Lawrence Arms