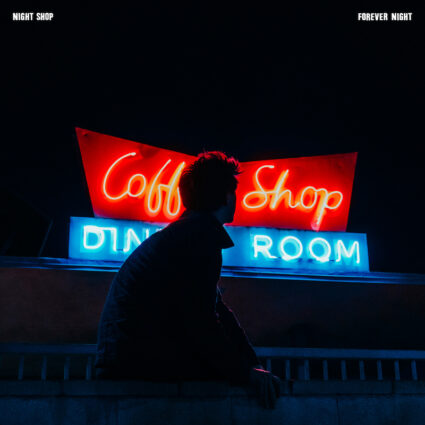 “‘For a While’ is a gem of sanguine songwriting, showing even while surrounded by some of the best singer/songwriters in indie rock, Sullivan is a standout talent of his own. – Under the Radar

“‘For A While’ takes reflective turns around letting go and restarting, delicately moving around [its] lyrics.” – American Songwriter

“With its infectious, self-perpetuating rhythm, the song acts as a kind of thesis for the album. A statement held aloft to ward off the darker corners encountered along the way.” – Various Small Flames

“‘Forever Night’ is a retro rock that takes inspiration from the past but gives it an energetic modern boost that feels like a mix of early Kevin Morby with a bit of a raw Strokes element.” – We All Want Someone to Shout For

Night Shop (the solo project of Justin Sullivan, who is best known for playing drums for Kevin Morby, in addition to playing with Flat Worms and The Babies) shares a brand new single and music video, “Let Me Let It Go.” The track is the third single off their forthcoming LP, Forever Night, which features Meg Duffy on guitar (Hand Habits), Jess Williamson, Anna St. Louis + Jarvis Taveniere (Woods/Purple Mountains), and is engineered by Jarvis Taveniere, and co-produced by Justin and Jarvis.

Watch video for “Let Me Let It Go“