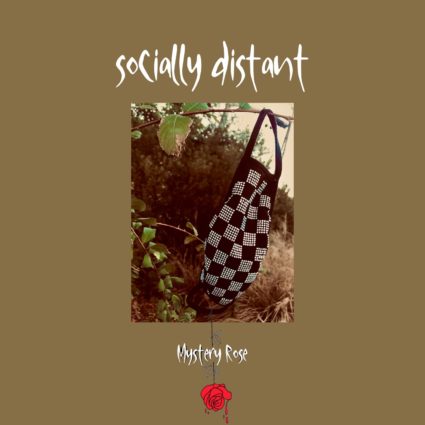 On her debut LP Socially Distant, LA’s Mystery Rose establishes herself as an emerging rock/pop phenom. Deployed in torch ballads and pop-punk numbers, her wise-beyond her-years songwriting imbues the 11 songs. Though she’s obviously grown up with millennial pop stars like Miley Cyrus, Mystery Rose sets herself apart with emo pop-punk twists worthy of Mitski or Soccer Mommy, complemented by Dan West’s spot-on arrangements. Mystery Rose—aka Zoe Rose –commands the kineticism of youth while realizing there are some lessons people never stop learning. “There are no new stories, but we can put modern twists on age-old problems,” says Rose.

With these songs, she does just that, holding space for nostalgia, anger, and reckoning alike. “All of the songs have a theme of isolation, loneliness and break ups.  However, there is also a feeling of acceptance,” she explains. She’s cultivated these songs under the tutelage of musician-producer Dan West (d’Animal, LoveyDove, Sidewalk Society), who also produced Socially Distant from, a, well, social distance. West had helped Rose realize not only her talent but her desire to make music early on. “I was intrigued with him immediately because he acted more like a student than an adult and always had two fistfuls of coffee,” Rose laughs. Working with West , Rose has been steadily writing and recording. She’s dropped five singles since 2018, and they’ve caught the ears of Indie Alliance DJ’s, including Rodney Bingenheimer, whose “Rodney on the ROQ” show launched a host of legendary artists (Blondie, Joan Jett, Nirvana).

Steve Hanft (Beck, The Cure) directed music videos for the singles. “Stability”, “Lovebirds on the Weekend” and “Picture Perfect” all have been released and have really cool aesthetics that showcase both Hanft’s talent as a videographer and Rose’s captivating lyrics