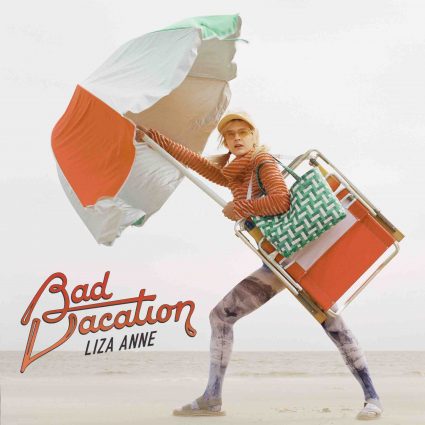 “Pushes her sound even further” – The Fader

“Bad Vacation invites one to share misery as a way of overcoming it.” – PopMatters (7/10)

Bad Vacation has been compared to the work of a diverse range of artists from contemporaries including St. Vincent to legendary art rock group, Talking Heads. Liza recently received acclaim from NPR Music who stated, “it feels good to hear [Liza] casting off the parts of her life that bring her down,” AV Club praised Liza’s blend of “old-school indie and Fleetwood Mac-esque melodic flourishes, with a passion that simultaneously evokes contemporaries like Courtney Barnett.” Paste described Liza as “freely electrifying,” with AV Club and Paste including Liza in their features on albums they are excited about in 2020.

Liza has opened sold out runs with Kacey Musgraves and Ray LaMontagne, made her national television debut on CONAN, and won praise from Hayley Williams who asked Liza to join Paramore on their inaugural Art + Friends festival. Liza recently launched  #EmotionalHealth2020 rallies – a live mental health focused interview series airing weekly on Liza’s Instagram. Each Tuesday at 6 PM CT featuring Liza with friends and collaborators including Shamir, Madison Cunningham, and Caroline Rose, with more on deck for future conversations, including Daisha McBride.

Bad Vacation is a self aware account of the emotionally difficult years that followed Fine But Dying’s success. The album reflects on her teenage years where she broke free of a repressive religious environment as well as her later self destructive years and the healing that followed. Much of the album focuses on the time on tour and where, fresh out of an exhausting relationship, which took a considerable toll on both her physical and mental health, Liza found herself often at her lowest and gained the insight that she was behaving in a way she learned to be destructive. Liza said, “I was a wreck. I was on a bender for emotional safety, not knowing that I could be my own healing space.”

She underwent intensive therapy that led to painful reckonings and valuable epiphanies to write her way out of the panic and anxiety, writing odes to autonomy and self-respect and who she wanted to see in the mirror.

The album was tracked in Kyle Ryan’s studio, Wardenclyffe South, in Nashville (With the exception of “Devotion” and “Desire” which were tracked at Kingsize Studios and Chez JMJ), with her touring band (guitarist Robbie Jackson, bassist Josh Gilligan, and drummer Cody Carpenter), alongside Nashville musician, Lou Hayat who creatively contributed to the project, adding french spoken word vocals and synth parts.

Liza Anne has created a virtual retreat to accompany her album release, a ‘Bad Vacation’ micro-site – featuring a 1-800 hotline, reading list, playlist, bundles, and more at BadVacation.co. This is where you’ll learn – A Bad Vacation with Liza Anne is better than a good day anywhere else!