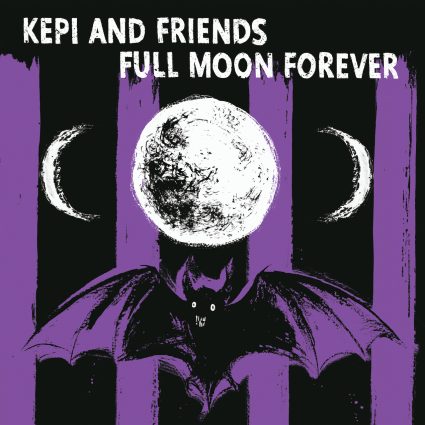 What kind of image does Full Moon Forever invoke to you? Slightly gothic feels with a sense of timelessness? Good! Then Kepi Ghoulie (of the Groovie Ghoulies) and friends have succeeded! When Ara Babajian of the Slackers approached Kepi about having an all new challenge, Kepi jumped at the chance to work with his long time friend and drummer hero! Bass player? B-face!!!! With solid rhythm section secured, they started selecting songs that they loved!

Years of long backstage chats revealed a common love of some of the “darker” songs of rock’s pop, goth, and new wave eras… the Cure, Cars, Lords of the New Church, Nick Cave all entered the conversation and a group of tunes was selected! Who would produce? Ara wanted to go somewhere new to him, so Kepi and Bface rounded up their old friend Mass Giorgini at Sonic Iguana studios in Lafayette, IN, a colleague who had produced some of Lookout records music in the 90’s and early 2000’s…

With 10 songs, also including selections by Nick Cave, Peter Murphy, Lou Reed and Iggy Pop, this little project was actually taking shape! They realized that if they just added David Bowie’s “Heroes” and TREX’ “Cosmic Dancer”, they would have a personal ‘desert island disc’, so they did!

Full Moon Forever is a great addition to Kepi’s catalog, and YOUR record collection!