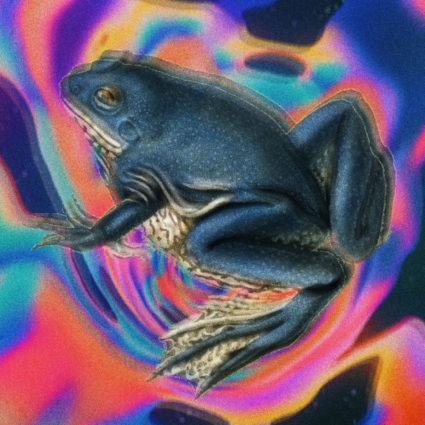 “a glassy, atmospheric psych-pop jam that distinctly recalls recent Tame Impala. The melodic sensibility isn’t that far removed from what Hundredth have shown in the past, but they’ve used a whole different set of tools to get there.” – Stereogum

“Post-hardcore turned synthpop band Hundredth swing for the fences on this M83-ish anthem off their upcoming album Somewhere Nowhere.” – BrooklynVegan

It would be something of an understatement to say Hundredth are unafraid of change. For over a decade, the South Carolina-based band have pushed themselves out of their songwriting comfort zones in a never-ending pursuit of sonic renewal that’s become more drastic with each release. The band have travelled from hardcore, to shoegaze, to dream-pop and beyond; this uncommon course has earned them critical acclaim as well as loyal listeners, who have come to trust that quality is the only predictable element of a new Hundredth song. Now with the release of their fifth full-length Somewhere Nowhere, the group have taken their biggest leap yet in crafting a boundary-defying, synth-pop tour de force that once again redefines the band—and proves Hundredth are anything they want to be.

Trying to achieve unbridled creativity amidst the weight of expectations is a concern that often hounds bands as they grow, but for Hundredth—vocalist/multi-instrumentalist Chadwick Johnson, guitarist Alex Blackwell IV, and bassist Andrew Minervini—it’s been a guiding light. The first half of the band’s career is firmly rooted in pummeling hardcore, and although they’d offered hints of their more melodic preoccupations on those earlier releases, listeners were still unprepared for Hundredth’s 2017 album, RARE. The record’s driving shoegaze and soaring vocals completely shed the ferocity of the band’s past work, but its seemingly risky sound change was embraced by fans and critics alike. RARE marked a clear turning point for Hundredth and also affirmed their longstanding approach. “It’s always been about where we are right now—what we want to hear, what’s inspiring in the moment,” Johnson explains. “It’s not a strategy, it’s just what we do. We’re always growing and changing as people, so it makes sense that the music does too.” (Continue reading full bio in download folder)