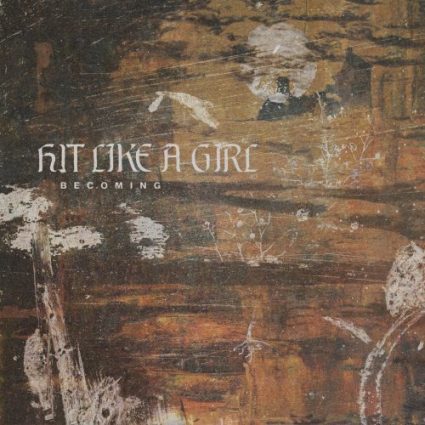 Coming up in the hardcore music scene, frontperson Nicolle Maroulis has always had a creative itch waiting just below the surface. Time and again, attempts to scratch it fell short for one reason or another, but on Becoming Hit Like A Girl sheds a layer and embraces change.

With the idea brewing in the back of their head, Nicolle would find the spark they were looking for in Gainesville, FL in October ’21. Following a chaotic and mind-blowing set by The Callous Daoboys at FEST19, Nicolle immediately gathered up friends and labelmates who were present for the show. Not one to let the flame fizzle out, Nicolle was determined to get a plan in place before anyone left the venue that evening. They immediately enlisted the help of friends and fellow Refresh Records labelmates, Talor Smith (Biitchseat) and Jimmy Wilkens (Jimmy Lo-Fi, The Sonder Bombs), and set a date for recording without skipping a beat.

In the months that followed, demos were shared back and forth across state lines before the band would settle into Cleveland-based Bottleworks Studio with producer Steve Perrino (Heart Attack Man, The Sonder Bombs, Biitchseat). The band was rounded out with Avery Hargrave and Michael Morris, both of the Cleveland-based band Mudwhale, laying the brutal, fast-paced beats and chaotic time signatures that formed the basis of Becoming. From blood curdling screams, to group chanting and cello-infused breakdowns, the studio filled with an air of experimentation and chaotic debauchery where no idea too wild to try. Hit Like A Girl had finally found a way to scratch the itch.