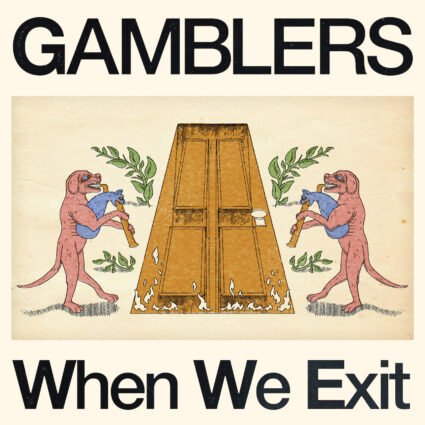 Gamblers - When We Exit [EP]

The music of Gamblers ripples with unseen meaning. Dark things lurk beneath the surface of Michael McManus’s sun-kissed harmonies and splendorous melodies.

Take “We’re Bound to Be Together,” for instance, a standout track from the New York group’s debut Small World (released via Symphonic in 2020). It’s a buoyant power-pop gem betraying ample evidence of Gamblers’ Beach Boys worship, but its sweet-tooth hook (“You and me / We’re bound to be together / Forever”) conceals a darker subtext: McManus is not singing about a romance at all. “I’m actually talking about the relationship of an addict in the throes of an opioid addiction,” says McManus, the leader and principal songwriter of the indie-rock band. Small World was praised by outlets like PopMatters and Newsday and landed single airplay on Sirius XM, NPR Music, and WFUV.

Now, a year and a half after Small World’s release, the song—retitled as “Bound 2 Be Together”—is among the highlights on Gamblers’ new remix EP, When We Exit. With intricate, nightclub-ready beats and guest features from acclaimed rappers Skyzoo and Mick Jenkins, When We Exit emphasizes the reverence for hip hop production that has always been embedded deep in Gamblers’ sunny, indie-pop fever dream.

A knowing belief in the gap between surface perception and grim reality is baked into this songwriter’s upbringing. McManus was born and raised (and is currently based) on the south shore of Long Island, where manicured lawns and picket fences disguise all manner of violence and dysfunction. McManus grew up in Massapequa, New York, just down the block from John Gotti Jr., who was then running the Gambino crime family while the elder Gotti was imprisoned. “My town was ground zero for the mafia when I was a kid,” McManus muses. “And then we have the Long Island serial killer, and the opioid epidemic”—the devastation of which he has seen up close.

McManus was born into more lawful enterprises: His family owns the oldest family-run bar in New York City, Peter McManus Cafe, where the musician grew up working as a waiter and barback. He credits the place with substantially influencing his writing and enabling him to view the city through both an insider and outsider’s lens.

As a high schooler soaking up the influence of ’90s alt-rock giants, McManus was active in Long Island’s DIY scene, memories he sums up as “loud guitars and craziness, running around like a madman.” But it was during his university days at Hunter College that his musical parameters expanded. The musician formed an electronic music group with a friend and spent every free moment immersed in production software. “I started making my own loops and my own beats, and that led to getting entrenched in the production side of things,” McManus says. “I wasn’t really performing in bands. I was basically a full-time producer.” (continue reading full bio on DISCO)