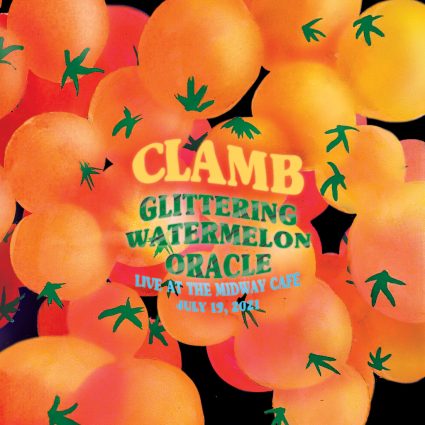 “Imagine a cosmic slop of funk elevating across the moon’s surface in a barge fit for the Nile. Where others may be jaded or adverse to the idea of progressive jazz and fusion, Clamb absolutely lap it up in droves on an album that takes offerings from Earth and the celestial.” —Dominic Valvona, Monolith Cocktail

“What’s that emotion you get when you watched a video on VHS in 1987 and there’s a scene where the protagonist is inexplicably able to hold a conversation in a discotheque with the love interest without either raising their voices to some music that wasn’t even proper disco, and then 30 years later you find out that the music they were dancing to was actually some properly respected cult band that you knew about but nobody else did unless they were in the know, with early Simple Minds bass player Derek Forbes sitting in for their own bass player, who was in rehab at the time and had read it on the soundtrack album? Yeah, that.” —Phil Lively, The Progressive Aspect

The Boston-based psych/krautrock band CLAMB are releasing their newest live record Glittering Watermelon Oracle on January 13, 2023. Clamb are known throughout the Boston and Northeast experimental rock community for their dynamic live energy, with its members constantly reinterpreting their former material and engaging in to-the-minute interplay between all the instruments. The performance that comprises Glittering Watermelon Oracle was captured on July 19, 2021 at the Midway Cafe in Jamaica Plain, Boston, Massachusetts and represents a particularly thoughtful night of reinterpreted tunes from the band’s debut LP Earth Mother Grapefruit (2021, Mint 400 Records) as well as documenting the moment of creation of three new improvised pieces that have remained in the Clamb live repertoire ever since.

Clamb treats each musical moment, be it live or on record, as a snapshot of an exact moment in time, free from the concept of mistake, instead reinterpreting mistakes as compositional tools to bring a piece of music to a new emotional level. The choices Clamb makes in its live show have evolved in the year since this performance was recorded, but as it was the band’s first club show since the pandemic forced its members apart for 15 months, it was an intense time for musicians eager to enter back into a world they were previously shut out from, and Clamb were bursting at the seams with ideas to share together. This concert stands as an important autobiographical touchstone for its members, since its freewheeling sense of energy and interplay went on to inform everything the band has done, and continues to do, since, and for that reason the band chose this performance out of its run of shows in the summer of 2021 to share with their fans as a proper release.