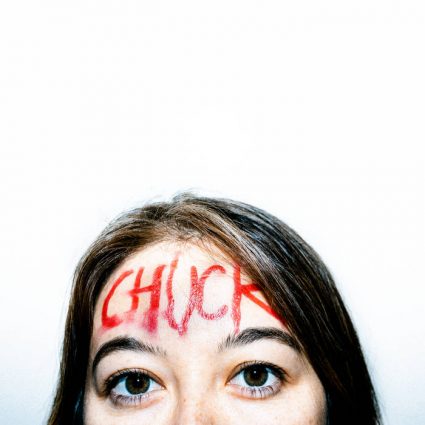 Megan Benavente is a familiar face to avid attendees of shows in the indie and punk rock scenes over the last several years. Working as a Front of House Engineer at LA’s legendary The Troubadour, Benavente has taken her skills as an engineer on the road with the likes of Manchester Orchestra, Kevin Devine, and Tiger’s Jaw, just to name a few.

In 2018, however, she stepped from behind the desk and joined Pinegrove as a band member. In between these extensive stints away from home, Benavente quietly weaved together her own collection of songs; creating the first anticipated-release from her new project, Chuck.

This release marks a significant shift for the songwriter, who originally released solo material under the moniker Megan Michelle Bird. Steering away from the sombre, stripped-back nature of her previous output, Chuck showcases a refreshing, in-your-face sonic universe that relishes the fleeting moments and urges us to investigate what’s most important to us. This uninhibited approach creates a kaleidoscope of kick-ass textures, created with the help of Manchester Orchestra members Tim Very (drums) and Andy Prince (bass), Pat Benson, formerly of Tigers Jaw (guitar) and producer Kyle Berzle.

As well as collaborating with the friends she’s made on the road, the songs themselves are laid out like a live experience. The first track, “ Downtown ”, introduces Chuck with low, murmuring city soundscapes – recorded on an iPhone – and hushed, looped vocals, mimicking the bubbling excitement at the beginning of a show. This all happens before the EP bursts into a crescendo of impenetrable hooks and distinctively captivating melodies.

As someone who flourishes both behind the desk and on stage, it was important that this record depicted the kind of live dynamics that Benavente has grown to love so much. “ I wanted this record to feel like a band playing live ,” she explains. “ Feeling like you’re in a warm hug and then the guitar comes in and you feel like you want to punch a wall. A lot of it comes from the way that your body reacts and your mind reacts and I wanted to follow those instincts .”

While she comes across as shy and reserved to those that don’t know her, Benavente says that Chuck is the personification of how she sees herself. Here, confidence is achieved through vulnerability, where songs that showcase uncertainty create strength and endurance. The single “ Waiting” speaks of both the pain and pleasure that come with an unrequited crush. “ Used To Be ” acts as an imaginative letter to her mother after Benavente came out as queer. “ Anyway ” wrestles with the overzealous male egos running rampant within the music industry and “ Something Else ” ponders the potential of a settled life outside of touring.

The artwork, created by Brittany O’Brien, further presents Chuck as a lesson in patience and authority of self. It showcases Benavente staring directly outwards while standing in front of a stark white wall, with nowhere to hide. “ Being front of house and being a part of a touring crew sometimes means that you can’t really allow the creative part of you to be at the forefront .” Benavente says. “ Chuck was a way to prove to myself and to these people that I’ve met that I can do this too. I’m one of you .”

By stepping to the front of the stage, Benavente has crafted an experience that encourages us to own the unpredictability of our lives. Here, she taps into something real and concrete through introspective honesty, self-belief and the spur-of-the-moment creativity that only comes from collaborating with some of your best friends and trusting your gut.