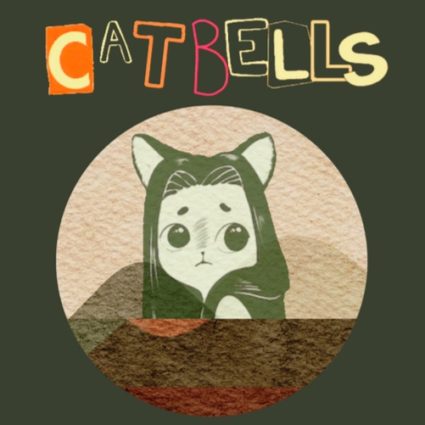 Catbells - Same As You [EP]

“Same as You, is less of a rainy day comfort than a sunny indie pop gem, featuring one of Catbells’ most outright catchy choruses yet. In the midst of brokenhearted gloom, Catbells’ latest effort is a warm gleaming light” – UNDER THE RADAR

Dreamy melancholic shoegaze meets alt-pop singer/songwriter Catbells engages her listeners with soft hypnotic vocals, lush soundscapes, and moody melodies that capture her deep, heartfelt emotions in the most intimate of ways. Gifted with a voice like an angel, Catbells gently immerses her listeners into a world of sweet nostalgia and velvety sentiments.

The singer/songwriter and multi-instrumentalist was introduced to the piano at age five, and by the 7th grade she was playing the guitar and writing songs about her middle school heartbreaks. After performing in several bands throughout her early music career, Catbells recently decided to focus on her own solo project.

Catbells is a somewhat enigmatic, shy wallflower type, with her name itself being an alter- ego. Named after the popular hiking spot recited in the famous children’s book The Tale of Mrs. Tiggy-Winkle by Beatrix Potter, Catbells‘ cinematic music is influenced by the vast natural wild. Raised in New England, Catbells often revisits the times of her childhood in her music, where she reflects on fond memories of the seasons changing, swimming in the eastern lakes, canoeing down the river, and working on the family farm.

Her newest single “Same as You” harkens the sounds of 90’s brit pop and feels both welcoming and nostalgic at the same time. Written about a relationship gone awry the listener gets a take of the story from both sides. The video amplifies that two sided sentiment as we are taken on an investigation into the scene of a crime! But begin to wonder who the real criminal actually is! Shot by Catbells entirely on her iPhone 8, the video is a glimpse into the creative world of Catbells.

The Same as You EP also features her song “It’s Not Hard’ and an acoustic cover of “Under the Milky Way” by The Church, one of Catbells‘ absolute favorite songs.

With influences ranging from 60’s folk like Nico and Donovan to 90’s brit-pop and shoegaze artists like Lush, Elastica and Pulp, Catbells has combined the best of these genres into a potent fusion of lofi “sad girl” indie rock beloved by many.