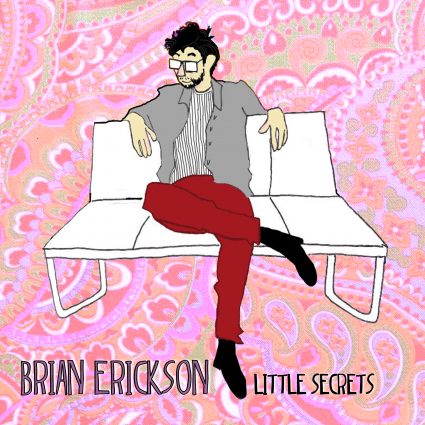 Brian Erickson is a lot of things: an award-winning vocalist, cohost of the acclaimed Great Albums podcast, and the leader of The Extensions, one of New Jersey’s brightest up-and-coming bands. This year, he finally adds the title of ‘solo artist’ to his mantle. And this fall he releases Little Secrets into the world.

The album takes its inspiration from both hazy songwriting of modern indie stars Soccer Mommy and Real Estate and the production aesthetic of those homemade early 70s albums like McCartney, Emmitt Rhodes, or Something/Anything where their creators produce and perform the entire album themselves, something Erickson had previously never done before.

Erickson has been calling this his “kitchen table” album. “It’s an album of small joys; and I love that it was recorded at home,” he said recently to the Dimestore Jukebox. Even though Erickson is the only performer on the album, Little Secrets is a master class in pastoral bedroom pop, complete with shimmering acoustic guitars, interwoven harmonies, melodic walking basslines, and memorable melodies.

”With beautiful melodies and extraordinary vocals, ‘Little Secrets’ is a jewel from start to finish.” Tory Sana | The Further