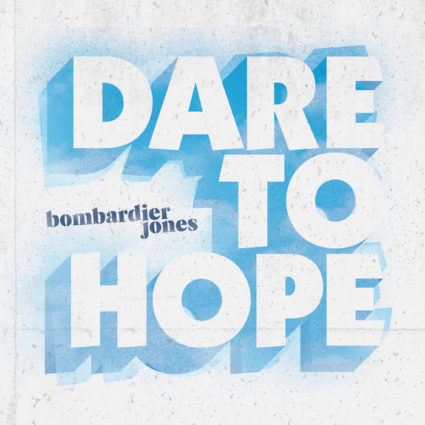 In rotation at WTMD

“Bombardier Jones is a tonic in these dark and divided times... A masterclass in gorgeous, graceful and gentle pop.” – Dave Franklin, Dancing About Architecture

“Dare to Hope is, at times, gently caressing and at others ruthless and powerful. Wrapped in a classic rock and country bow, it’s an album where you get to know the innermost thoughts and feelings of a songwriter unafraid to let it all hang out.” – Jamie Parmenter, Vinyl Chapters

“Bombardier Jones reminds me of Elvis Costello, Tom Petty, George Harrison and beyond. The great full production took me back to when Music really mattered to me.” – Johnny Reed, Indie Artist Spotlight

“I’m beginning to think that this guy is an antidote to our ills… There is a sense of joy on these songs.” – Blue’s Blues

Bombardier Jones’ Dare To Hope blends rock and roots in 10 songs about staying cool and getting wild. A change of mood from 2015’s torchy Can’t Conquer Me, the upbeat new album glides across Kinks-ish psych-rock, cosmic country, horn-toasted twang and mellow earworms – all daring the listener to reject despair and reach for hope.

A love for British psychedelia collides with Bombardier Jones’ post-punk origins in a sound that is very much his own, even as it draws on the multi-colored legacy of rock n roll. Tracked in Boston with David Minehan (The Neighborhoods, the Replacements) at the mixing desk, the new album was brought to life with the help of renowned session musicians Dave Mattacks (Fairport Convention, XTC, Paul McCartney), Jon Carroll (Mary Chapin Carpenter, Rodney Crowell, Eric Lindell) and Kevin Barry (Roseanne Cash, Jackson Browne, Ray Lamontagne).

Baltimore-based Bombardier Jones got his start with This Is The King Of Suck in the sarcastic, bombastic indie-rock ‘90s. But the new songs call for an all-out rebellion against anxiety. “It’s so easy to feel bleak and get ground down, especially these days. In tough times, you still have it within you to not only survive but prosper – and have some fun along the way,” he says. “Even if it’s only for three-and-a-half minutes at a time.”

A child of the DIY punk ethic, Jones opened a rough-and-ready recording studio at the age of 22, recording and touring with indie-rock bands on the Teenbeat label while playing his own brand of off-kilter rock in Washington DC’s coffeehouses and rock clubs. In his role as a world music producer, he recorded the chart-topping Roots Master and Sign Time releases with roots reggae founder Claudius Linton in 2008 and The Yehla Collective’s 2019 Steel Strings & Iron Curtains, the first English versions of Czech folk music that inspired the Velvet Revolution.