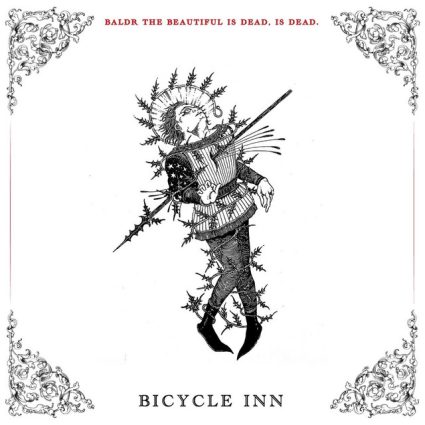 Bicycle Inn - Baldr the Beautiful is Dead, is Dead. [EP]

“marries the clean, power-poppy side of emo to the mathy, noodly side; fans of stuff like The Promise Ring, Everyone Everywhere, and Into It. Over It. should check this out.” – BrooklynVegan

“The loud-soft dynamics and tight songwriting show marked growth for the foursome, just in time for their full-length debut. Fans who have been around since 2018 and newcomers alike should get excited about the direction in which the single propels Bicycle Inn.” – The Alternative

“This album takes everything I love them for, the riffs, the vocals, the shouty bits, and just builds on them so that they’re better than they’ve ever been. This album really feels like they’ve taken their sound and matured it, and I am so happy with what they made.” – ChirpReviews

Introducing Bicycle Inns‘ next project, Baldr the Beautiful is Dead, is Dead. As a follow up to their last full length, THIS TIME AND PLACE IS ALL I’LL EVER KNOW. The band takes a more post-hardcore stance on this new endeavor, while still keeping the twinkle emo we all know and love. Formed in the Winter of January 2016, Bicycle Inn is a an Emo band from Boston, Massachusetts. Consisting of members, Declan Moloney (Bass), Noah Aguiar (Guitar & Vocals), Dylan Ilkowitz (Guitar Rhythm), Gilmar Perez (Guitar Lead) and Shane Muir (Drums).