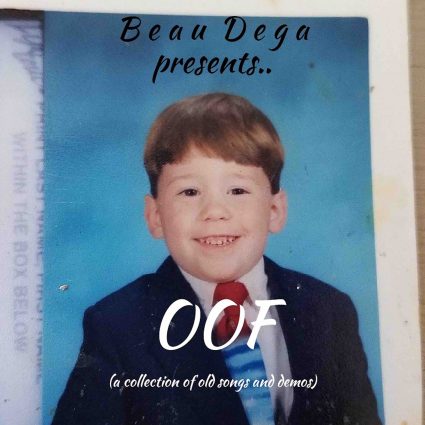 Based in Norwalk, Connecticut, 28-year-old self-taught musician, Beau Dega, works alone from his bedroom in the company of his various guitars, keyboards, borrowed drums and homemade percussion instruments.

Beau’s recently released OOF, a 20+ track album featuring unheard songs recorded between 2011 – 2017, showcases his evolution and experimentation as a musician. OOF ranges from cassette demos to fully produced songs that had been lost to time and growing pains.

Summer of 2017 saw the release of Beau’s first album Sleeping Alone. Recorded in a short 3 months on a now broken cassette recorder, Sleeping Alone reflects on relationships, the fear of being dependent, and growing older.

Beau’s new full-length album, HOLY CANNOLI, is expected to drop during the Fall of 2020.  Leading up to the launch of HOLY CANNOLI, new singles such as It’s Luv, Soft Boi, B.O.M.B.S, and other songs featured on the album will be released.