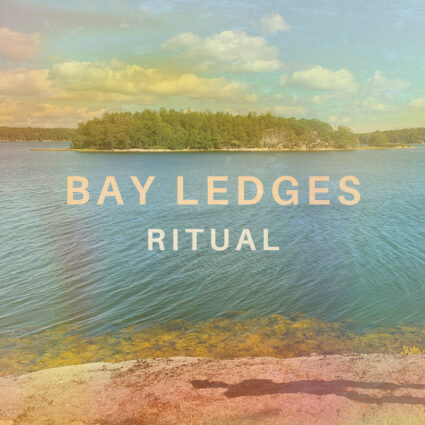 Bay Ledges is the project of Maine-born musician, Zach Hurd. Inspired by a bicoastal existence, his warped love songs compose a biome of spacious beauty and playful introspection. Ritual, his long-awaited debut album, presents that sonic landscape in rich, daring technicolor: a breathtaking evocation of Bay Ledges’ artistry that’s as surreal, strange, and gleefully vibrant as anything he’s ever released.

Bay Ledges began as a low-stakes creative outlet for Hurd. Combining lackadaisical guitar and sunburnt, unburdened beats, early EPs like 2017’s Fountain Tropical, which contained the viral hit “Safe”, and 2018’s In Waves, reflect the project’s wide-eyed, magnanimous point-of-view, painting pictures of new romance and companionship with piquant wit. Although practically rudimentary in comparison to the stranger, richer textures of Ritual, these early records display an undeniable, intoxicating point of view. The Bay Ledges world is one brighter, more colorful than ours.

The Bay Ledges sound crystalized on 2020’s New Daze. After years of touring the US and Canada off the back of Fountain Tropical and In Waves, Hurd needed a reset — a way to get back to the low-stakes playfulness that guided early Bay Ledges releases. The resulting EP, led by a mission-statement named “Reintroduction”, did exactly that, channeling the production and performance acumen he had accumulated over time into a more cohesive, more impactful version of Bay Ledges.

New Daze was the perfect entry point to Ritual, a 13-song record written, produced, and mixed entirely by Hurd, that translates Bay Ledges’ expressive, almost avant-garde style onto a larger canvas. Exploring transience, nostalgia, and Hurd’s own relationship to music and art, it’s a meditative record that’s still as psychedelic and thrilling as anything Hurd has released. Written and recorded at a time of great upheaval in Hurd’s life, it carries with it an air of intense possibility — the sense that Ritual is not just part of Hurd’s world, but part of yours, too. (continue reading full bio on download page)