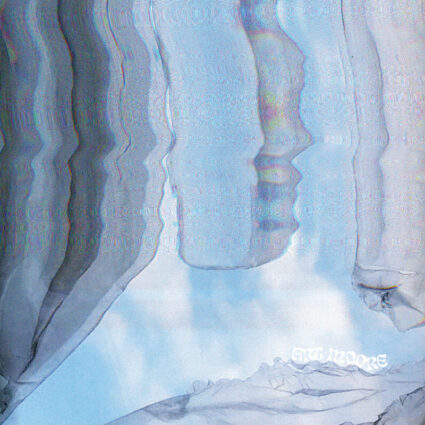 Art Moore make vivid, heartbreaking short stories. Each song on the newly formed three-piece’s self-titled debut album is its own individual universe of bittersweet feeling: a brief snapshot of a moment in time that captures the fragility and occasional impossibility of human connection. The ten tracks that comprise the record are deft character studies, zeroing in on restless widows, shy beginners, jilted friends and friendly exes, chronicling minute moments — road trips, casual dates, games of truth or dare — with rich detail and subtle wit. The result is a world of remarkable emotional complexity, an album-length study of loneliness, heartache, and loss that’s sweet but never saccharine, sad but never maudlin. Featuring the inimitable songwriting of beloved Oakland luminary Taylor Vick of Boy Scouts set in sharp relief against lush production from Ezra Furman collaborators Sam Durkes and Trevor Brooks, it’s a quietly wondrous record — a set of songs that sketch out the struggle and beauty of coping with everyday life.

When Durkes, Brooks and Vick first set out to collaborate, the idea of Art Moore, as a band, or Art Moore, as a cohesive, ingratiating record, was still a ways away. Durkes had become close with Brooks through his work on Ezra Furman’s 2019 record Twelve Nudes, and the two had  begun work on her soundtrack for the Netflix series Sex Education. The pair already knew Vick, who had established herself as a prolific cult solo artist with Boy Scouts, and asked if she would be interested in lending her voice to the recordings.

“We all met up at the studio, and it was never even like, ‘Let’s be a band’, that was never a thing,” recalls Durkes. “It was more like, ‘Let’s think of a movie scene or a photograph or still image and see if we can write something around it.” Reflecting on those initial sessions, Brookes adds, “we wanted to work on something new outside of what we were so used to doing.”

Spurred by that early collaboration, the trio decamped to a studio in Oakland in January 2020, where it quickly became clear that a wellspring of inspiration lay untapped. They fell into an easy rhythm: Brooks and Durkes would work on a track from the instrumental demos they had made together, while Vick sat outside, writing hooks and lyrics. When she was done, she would come inside, lay down what she had written, and the process would repeat. The trio’s remarkable efficiency gave them the confidence that they had more than a handful of demos on their hands; the contours of Art Moore were beginning to take shape. (continue reading full bio on DISCO)