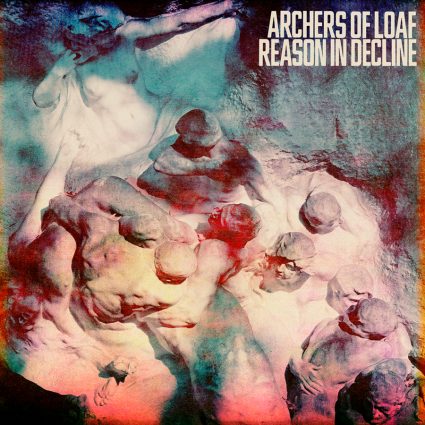 Archers of Loaf - Reason in Decline

“the North Carolina rockers sound furious about, well, everything, as they well should! Over ear-splitting distortion and explosive drums, Eric Bachmann’s sandpaper vocals sound ready to tear it all down.” –Stereogum

“a strident, anthemic single.” –SPIN on “In the Surface Noise”

“[‘In the Surface Noise’] starts with Eric Bachmann’s signature throaty croon and oscillating guitars. It’s evocative of a stadium rock jam, building slowly into an 80s rock chorus reminiscent of the heartiness of Bruce Springsteen.” –Paste

“a sprawling, massive-sounding tune that finds a smart balance between past and present” –Consequence on “In the Surface Noise”

“fiery, anthemic” –Brooklyn Vegan on “In the Surface Noise”

“The lead singles from Reason in Decline suggest that they’ve had a lot of ragged punk rock energy still left in the tank. They sound as loud and raucous as ever, and it’s hard not to be excited about that.” –Treble

As sculpted shards of guitar—tumbling, tolling, squalling— shower the jittery bounce of a piano on opener “Human,” it’s obvious that Reason in Decline, Archers of Loaf’s first album in 24 years, will be more than a nostalgic, low-impact reboot. When they emerged from North Carolina’s ’90s indie-punk incubator, the Archers’ hurtling, sly, gloriously dissonant roar was a mythologized touchstone of slacker-era refusal. But this, the distilled shudder of “Human” (as in “It’s hard to be human / When only death can set you free”), is an entirely different noise. In fact, it’s a startling revelation.

A few distinctions between 2022 Archers and the Clinton-era crew—whose “South Carolina” could be heard blaring out of Jordan Catalano’s car radio on ABC teen-angst epic My So Called Life. First, guitarists Eric Bachmann and Eric Johnson, once headstrong smartasses inciting a series of artful pileups on the band’s four studio albums and EP, are now a fluidly complementary, sonically advanced unit. Notably, Johnson’s signature trebly lines peal clearly above the din instead of struggling to be heard. Second, singer-songwriter Bachmann, after throat surgery, relearned how to sing (this time from his diaphragm); as a result, he no longer howls like the angriest head cold on the Eastern Seaboard. And now, his lyrics balance righteous wrath with a complex tangle of adult perspective. He still spits bile, but it’s less likely to concern scene politics, music trends, or shady record labels thwarting the dreams of a young rock band. (continue reading full bio on DISCO)